Boise United maintained its undefeated dominance this week as they hosted the Portland Pigs.  D2 head coach Kirk Pulver noted regarding the Pigs, “Portland is a solid club and gave us any fits.  Our forward pack is taking on an identity that pleases us coaches.” Pulver further described his pack as craving “blue collar work.”  This was evident on the scoreboard as Boise jumped ahead quickly with 14 unanswered points.  Portland later took a small advantage of a Boise yellow card, but the halftime score still favored Boise 22-12.  Both teams came out swinging in the second half, putting points on the board.  Boise added another 7 with 10 minutes left and Portland could only answer with a yellow card as they fell to United 41-17.  Elsewhere, Tacoma Nomads wandered down to Camas High School and met a strong Eastside Tsunami squad, riding a winning wave of high-scoring games.  Tacoma would prove a tougher side than Eastside was expecting, especially in the forwards, so Eastside’s game plan was to get the ball out wide and run downhill.  This strategy would be beneficial for the Tsunami, as they defended an onslaught of pick-and-goes and washed away Tacoma 78-19.

Boise United D3 remained unbeaten against Portland Pigs D3.  Boise dominated in every aspect of the game and put up 40 points in as many minutes to make it 40-0 at half.  Portland regathered themselves for the second half and scored quickly, but could not keep the ball or stop Boise’s offense as the United put up another 19 and relinquished only a penalty try to skin the Pigs 59-14.  The win gives Boise sole possession of top seed.  Eugene Stags travelled to Bend to face the Roughriders in an attempt to climb up the board.  The Roughriders would have something else in mind and gave the Stags quite the ride from the start, closing the half 45-12.  The second half was a reflection of the first as Bend would more than double their first half points, knocking the Stags down from the third spot, 93-12.  Top seeded in PNW North, Seattle quake hosted Budd Bay Buffaloes in a battle that could be a foreshadowing of what is to come later in the season.  Both teams showed strength and rigidity, and it would be Seattle that would break first near the end of the half.  7-12 at the midway whistle.  The Quake would show a collective strength and regrouped for the second half, quickly taking the lead 14-12.  Seattle would score again while short a man due to a yellow card making it 19-12.  Budd Bay would fight hard for a comeback, but fell short at the end 19-17.  Oregon Sports Union (ORSU) D3 travelled to across town to face the Portland Lumberjacks looking for their first win.  ORSU D3 was relentless in their attack and toppled the Lumberjacks 7-43.

Boise completed its trifecta of a rugby day as the United women hosted Chuckanut Bay Geoducks.  Boise looked to jump ahead of Chuckanut in the standings and needed the win.  Head coach Carrie Magnuson described the game as “good phase play and owning the breakdown area resulted in ten tries,” “lead by 5 tries from back Megan Harvey and 3 by forward Lauren Hennrich.”  Boise would move up a spot with a convincing victory 54-14.  Emerald City Mudhens would defend their first place spot on the road against Bend Lady Roughriders in a defensive battle, nearly shutting out Bend, except for a consolation try with 5 minutes left to make it 7-24. 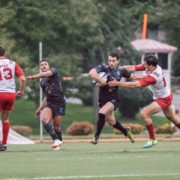