MANCHESTER, U.K. – The USA Men’s Falcons have finished the AF International Sevens preseason tournament in fourth-place. After a tough two days of competition against five international sides who came fully-loaded with experienced players, the United States fought through injury to come away with two wins out of six fiercely contested matches.

“We finish fourth but good experiences for a number of the boys who certainly stepped up over the weekend to this big challenge, compounded by the injuries and withdrawals we suffered prior to arriving,” said Head Coach Mike Friday.

Though the losses were tough to swallow, the team now leaves with an understanding of how they measure up to senior international sides and what areas to focus on heading into Dubai Sevens this December. The hard-learned lessons have allowed the program to identify needed improvements ahead of the season; a strategy to avoid risking the outcome of regular Olympic qualifying competition at the HSBC World Rugby Sevens Series.

Along with the United States, the tournament featured teams from England, Ireland, France, Germany and Spain, all competing in round-robin competition over the weekend.

The Falcons opened the tournament just one conversion shy of a win over Spain (19-17), before a tough battle with a very experienced English side forced them to drop their second match (38-12). A victory over Germany (19-17) closed out the first day, as Coach Friday and the Falcons reflected on how to avoid errors in possession and create opportunities to build pressure.

Day Two featured another difficult loss to Ireland (27-12), followed by a bold defeat of France (27-19). The five matches put the United States at fourth in points differential, with one more against the French to close out the tournament.

The Falcons went into their final game with only 10 players, losing another two in the battle due to injury as France cruised to a bold victory of their own (36-0), sealing the United States’ position in fourth-place.

As is the case with any developmental tournament, the Men’s Falcons used the AF International Sevens to expose new players to the rigors of international competition. Knowing the upcoming HSBC World Rugby Sevens Series will bring sharp, battle-ready teams all vying for Olympic qualification, the preseason tournament was critical to give athletes a taste of what they can expect this year.

The HSBC World Rugby Sevens Series kicks off on Nov. 30 at the 2018 Dubai Sevens tournament. Pools and schedules will be announced closer to date. 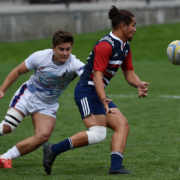 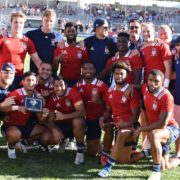 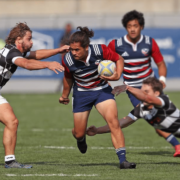 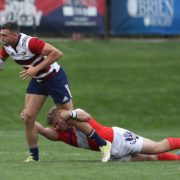