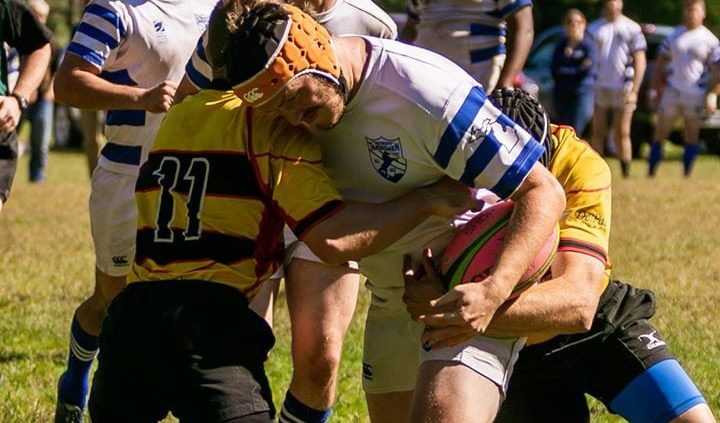 It was another busy week in the Midwest Premiership. The closest fixture was between the Cincinnati Wolfhounds and the Chicago Griffins. Joel Conzelmann scored two tries and slotted 4 conversions and one penalty for the Chicago Griffins, for 21 of their 36 points; as the Griffins won 36-32.  The Chicago Lions beat the Detroit Tradesmen to remain perfect  at 3-1 on the season,  final score 48-27. The Detroit Tradesmen now fall to 3-1 on the year. Palmer College Dragons made the trip out to see the Kansas City Blues and waled away with a win, 33-21. St. Louis Bombers  found holes everywhere in the Milwaukee Barbarians defense, winning 90-3.

Wisconsin Rugby 12-31 Detroit Rugby Wisconsin fought back from a 12-5 deficit to tie the game up in the 45th minute. However, Detroit scored three unanswered tries in the closing quarter to secure the win. This gives Detroit their third win on the season, while Wisconsin is still searching for their first.

It was a back and forth affair for the full eighty when Lincoln Park took on the Green Bay Celtics. Lincoln Park ran out to a quick 17-8 lead before losing the lead moments before the half, trailing 22-20 after 40. The second half told a similar story; Lincoln Park fought back to secure a three-point lead, but a try in the last minute to Billy Hill saw Green Bay walk away with the hard-fought victory, 36-32.

The Eastside Banshees secured their first win of the season over the Indianapolis Impalas in a nail-biter, 27-26. The two teams had been inseparable all game, with no team leading by more than 8 at any given moment.  It was a penalty try in the 70th minute for the Banshees that gifted them the win, as neither team could source any points in the final ten minutes.  The Chicago Blaze fell just short against the Chicago Lions D2 squad, falling 36-34.

Great Lakes:
The Rochester Aardvarks dominated South Buffalo, 50-22.  In a more evenly matched game, the Pittsburgh Forge got one over on Buffalo, 34-24.  The Cleveland Crusaders moved atop the table as they cruised to a 54-13 victory over the Syracuse Chargers.

Women’s Division II: East Gold:
South Buffalo survived an early scare from their cross-town rivals, the North Buffalo Ninjas, to secure their second win of the season, 29-17. The Pittsburgh Forge travelled to Buffalo and walked away with an impressive 41-39 victory. The two teams traded tries for the first twenty minutes before the Forge scored two unanswered as the teams prepared to head into the sheds, leading 24-12 at the half.  Buffalo stormed out of the gates in the second scoring three unanswered and stealing the lead back. However, the Forge scored three tries in ten minutes to take a lead they would not relinquish. Pittsburgh scored again in the 77th minute to lead 41-34 but Buffalo after crossing at the death had a chance to steal a draw. It wasn’t to be as the kick was missed and the Forge maintained their perfect record.

East Green:
Columbus Rugby won the only game to be played over the weekend in the East Green pool, as they easily defeated the Circle City Tempests, 56-0.

West Gold:
In a great display of resiliency, the Illiana Banshees won on the road against the Fox Valley Vixens. Trailing 27-7 at the half, the Banshees came back to win the contest, 40-34. Another great game was played in the West Gold pool, when the top two teams faced off. The now 5-0 women of Grand Rapids, took down the, formerly, 3-0 Chicago Sirens 12-10.

Women’s Division II West Green:
Milwaukee Scylla continued their resurgence after the first-round loss to Palmer College, by defeating the formidable Twin Cities Amazons D2 side, 37-20. In their last three games, the Scylla have accumulated 171 points while only conceding 37. The Minneapolis Menagerie were in for a long day at the office as they fell to a dominant Chicago Lions squad, 120-0.

Men’s Division III:
Chicago Area:
The Northwest Indiana Exiles secured a big win against the Chicago Dragons, 67-0.  The Illiana Misfits also locked away a decisive victory against the Lake County Gladiators, 65-17. The closest game of the pool saw the Chicago Riot get the narrow win against Lincoln Park Rugby D3, 33-26.

East:
Cleveland Crusaders D3 disposed of their neighbors, Akron Rugby 48-13. It took two tries in the final ten minutes to Daylon Rookard and Dante Raffin for the Canton Maddogs to squeeze by the Cleveland Rovers, 26-22. In a top of the table clash in the Allegheny pool, the Pittsburgh Forge D3 moved to 4-1 after beating the Presque Isle Scallywags 21-17.

Iowa:
It was a busy weekend in Iowa. The front-running Iowa City Ducks, lost their first game of the year to Des Moines, 29-17. Clinton Muddy River were simply a class above the Omaha Goats, 65-5. Bremer County Bucks continued to dispatch their opposition with ease this year, as they beat the Northeast Iowa Barbarians 81-3.

Minnesota:
In Minnesota, the Eastside Banshees D3 fell to the Rochester Rogues, 24-17. While the St. Cloud Bottom Feeders, were able to make light work of the Mankato Marauders, 36-17.

North:
In the North, the Toledo Celtics avenged their Round 1 loss to Michigan, 50-12.  The Detroit Tradesmen D3 were able to win a close encounter against Detroit Rugby, 18-13. Traverse Bay Blues came from behind against the Capital Area crises to secure a 21-19 win. Fort Wayne Rugby demolished the Michiana Moose, 95-0; and the Kalamazoo Dogs were unable to get a home win over the red hot Grand Rapids Gazelles, falling, 52-11.

Buckeye:
Dayton Flying Pigs D4 were unable to repeat the success of their D3 side and fell to the Lancaster Men of Stone, 41-10. The Columbus Castaways D4 side, dotted down in the final minute of their game against the Columbus Coyotes to snatch victory from the jaws of defeat, 22-19.

Iowa:
Iowa Falls Rugby were on a roll, barreling over the Cedar Rapids Headhunters, 54-5.

North:
The Eastside Anchormen got up over the Findlay Scars in a high-powered game, 65-47. In total, the game saw 17 tries scored, ten to the Anchormen and seven to the Scars.

HSBC World Rugby Sevens Series 2019 all set for kick off as race for Olympic...
Scroll to top