Two previously undefeated teams took their first losses of the season, and now the Women’s Premier League (WPL) standings have tightened up after four rounds of play.

The Amazons had lost both road games thus far, and their previous home match ended in a draw with Beantown. New York, which rostered 17 players in Minnesota, wanted to get out in front quickly and sent Sarah Levy in for the first of two scores from the wing. The WPL newcomer currently leads all point-scorers with eight tries thus far.

The home side welcomed back Katie Johnson, who made an impact from No. 8 and scored the subsequent two tries. Flanker Rebecca Brown, inside center Sylvia Braaten and wing Kaelene Lundstrum scored before the break, and fullback Megan Wolff’s conversion gave the Amazons a 27-5 lead.

In the second stanza, Twin Cities lock Marina McCuskey dotted down a sixth try, and at the 60-minute mark, prop Alicia Gillberg added another five. Wolff kicked the extras for a healthy 39-5 lead into the fourth quarter, and with minutes left in the match, Levy notched her second try to end the game.

“Our goals [Sunday] were to connect and to finish on the opportunities we create. New York is a very solid squad and we knew in order to compete we had to execute and take care of the ball,” Twin Cities captain Sylvia Braaten explained. “We did a better job of keeping our intensity high throughout the match but still have much to improve on. We are looking forward to taking the momentum of [Sunday’s] win into the second half of the season.”

The scoreboard was relatively quiet during the first quarter of the Beantown vs. DC Furies game. Beantown fullback Michelle Omondi scored in the opening minute and inside center Kimber Rozier converted. D.C. flyhalf Lauren Rhode kicked the team’s only points at the 20-minute mark (7-3), and then Beantown found its groove to the tune of eight more tries.

“We’re so excited with our growth this fall, and can’t wait to get back to work this week,” Beantown co-captain Claire Stingley enthused. “We’ve been working on building a rhythm and trusting our system on attack, and this week we saw it really starting to click: We were able to move the ball well and capitalize on opportunities.

“We’ve been aggressively developing our technical skills the past couple weeks, and our trainings are paying off both in continuity and team cohesion,” the flanker continued. “We still have a lot of hard work to do, but this team is hungry for more progress.”

Stingley credited the Furies’ strong, shifty runners for challenging the defense and forcing quick readjustments, but Beantown had more success with ball in hand. Weapons like Omondi, who scored four tries in the first half, found great success. Rozier’s try and three additional conversions gave the home team a 33-3 halftime lead, and the second half continued on steadily. Lock Stacey Bridges, Stingley and WPL debutante Kelli Smith added tries, while Rozier handled the extras, 52-3 the final.

The closest game on the scoreboard occurred in Chicago, as North Shore (0-3) hosted San Diego (2-1) for both teams’ third game of the season. The Surfers raced out to a 24-0 halftime lead, as lock Laura Easterling, wing Tiffany Tate (2) and flyhalf Hunter Griendling scored tries. Inside center Megan Foster kicked two conversions, and that marked the end of San Diego’s scoring.

“Berkeley pushed us all over the field – at least, that’s what it felt like. The scoreline was not indicative of the game or how it felt,” Glendale captain Sarah Chobot said. “Berkeley was really physical, and it was a weird game – injuries and blood stoppages, lots of yellow cards. And there were passages of play where it’d be a long break for us and then a long break for them – more like a track meet. But Berkeley pressed us in everything.”

The Merlins took the first lead through flanker Rachel Ehrecke, who ended the day with two tries, and is one of several WPL first-years making an immediate impact in Colorado. The All Blues answered with back-to-back scores from Evan Hoese – who along with fellow center Cathy Cai drew high praise from Chobot – and wing Serena Liu. With Sam Miller’s conversions, Berkeley led 14-5 after 20 minutes.

The second 20 saw Glendale reclaim the lead, as lock Charlotte Thompson, Chobot and Ehrecke scored for a 20-14 halftime edge. Glendale extended its lead through prop Melissa Polheber and flyhalf Hannah Stolba, who converted both (34-14), before Berkeley hooker Katy Augustyn scored a third try for the NorCal squad, 34-21 with Miller’s extras.

“We definitely trusted our fitness, which is something the new coaching staff pushed early on,” Chobot reflected on the final 20 minutes of the match. “We cleared our bench and they did a great job.”

A final burst of energy saw wing Justine Wypych and flanker Joanna Kitlinski close out the game with tries, and Stolba’s conversion afforded the 46-21 win. Ehrecke and Thompson earned MVP accolades for Glendale, while Hoese and Cai were recognized on Berkeley.

“We’re happy with the win, and with the bonus point, but we’re definitely not satisfied about playing a complete game. We have tons of things to work on,” Chobot ended.

The Blue Conference standings have not changed in order, but with Berkeley getting the bye this weekend, there’s potential for a new leader in week five. In the Red Conference, standings toppers Beantown and New York will meet in the Big Apple on Sunday afternoon. 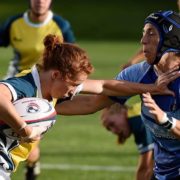 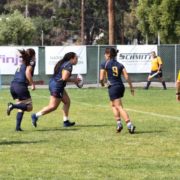 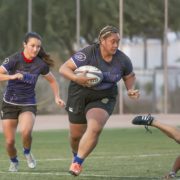 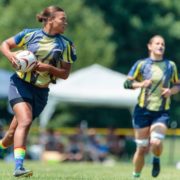 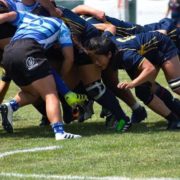