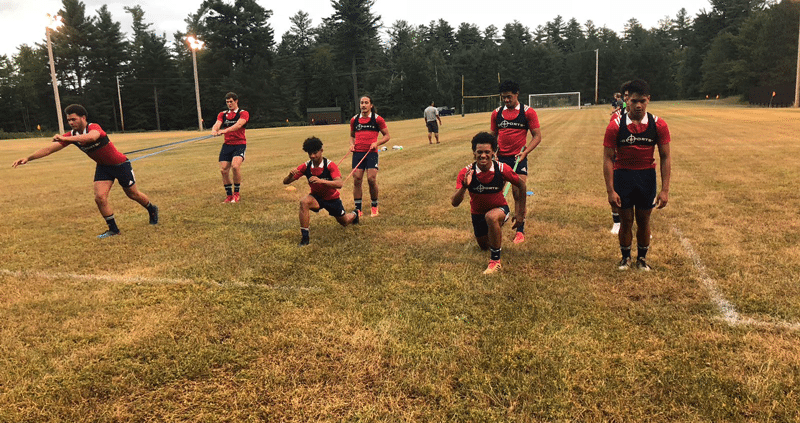 The Games will kick off on Oct. 6 following the Opening Ceremony with pool play competition for rugby sevens beginning Oct. 13 at 11 AM ET. Medals will be awarded on Oct. 15 with broadcast information and a full schedule confirmed closer to date. Updates will also be available by following @USARugby on Twitter.

After naming an extended squad of 16 athletes, Stephenson and his staff spent time evaluating players’ performances after the recent Can-Am Futures Sevens tournament.

“This selection process was one of the toughest we’ve been involved in; that’s a testament to the wider playing pool and their respective programs, coaches and staff,” says Coach Stephenson. “The level of play we’ve seen and countlessly reviewed has made for a long and arduous final selection. We are confident the men chosen will represent Team USA to the fullest. I can’t thank our coaching staff and those coaches we were fortunate to share this journey with for their time, dedication and friendship.”

Headlining the squad as Captain is standout Junior Waqavesi who trained with the senior USA Men’s Sevens team and recently participated in the 2018 Youth Touch World Cup for USA U18. Also accompanying the bunch is Ty Al-Jiboori who follows in the footsteps of his older brother Malon Al-Jiboori, a capped Men’s Eagle (15s) and Men’s Sevens’ player.

Additionally, three players — Lauina Falatea, Johnny Mahe and Uluamu Niutupuivaha — all join the team from Kahuku Rugby adding a built-in comradery that will accent the entire group through the competition.

“From a preparation standpoint, we’ve been fortunate enough to lean on Coach Salty Thompson for some Youth Olympic Games insight having lived it in the previous iteration of the Games,” said Coach Stephenson. “Our Men’s Sevens staff also graciously provided a unique perspective on the Olympics, as well as technical and tactical support of our playing group and staff.”

Team USA finished fifth in rugby sevens at the Summer Youth Olympic Games Nanjing 2014, where current Men’s National Team (15s) player Hanco Germishuys scored a momentum gripping try to help his side defeat Japan. Knowing of Germishuys’ success both at the Youth Olympics and with the senior Men’s National Team, the emerging athletes heading to Buenos Aires have that much more to play for.

Coach Stephenson and his squad will assemble later this month for a training camp at the U.S. Olympic Training Site in Chula Vista, CA, arriving in Buenos Aires in early October. Broadcast information and a full schedule will be confirmed closer to date.