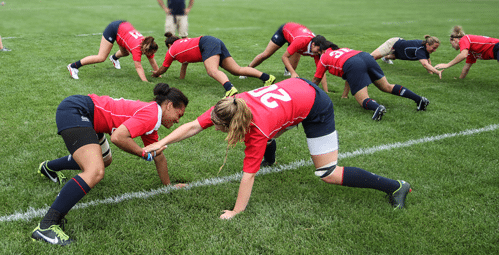 “This should be a great learning experience for the players. There is a really nice blend of experience in the squad, for some this will be their first taste of international rugby,” says Head Coach English. “On the other hand, we want to see the more experienced players really step up and lead. The tour will be a great opportunity to benchmark as this group looks towards 2020 and beyond.”

The U20 Women’s Tri-Nations Cup begins August 7th with the Women’s Junior All-Americans (WJAAs) facing rival-Canada’s U20s. The following week, the WJAAs will play England’s U20s in their final match on August 14th, both taking place at Acadia University. Updates will be available by following @USARugby on Twitter.

Competitions like the Tri-Nations Cup are critical for the development of athletes as they continue their journey to become national team players. And, in order to compete, monetary support from the community is crucial. To support All-American athletes, click here.

WJAAs ready to be relentless in Can-Am rematch