New York is the first team to win three Women’s Premier League (WPL) championships, earning the ninth title with a 27-26 victory over Glendale Sunday. Both of New York’s wins in Tucson, Ariz., needed a come-from-behind effort, making the 2017 trophy an especially memorable one.

Glendale got the best of the first quarter and was rewarded with 12 points. The Merlins drew a short-arm penalty during an attacking scrum, and scrumhalf Jenny Lui quickly tossed the ball to No. 8 Carmen Farmer. The 7s Olympian tapped and tore down the weak side for the try. A composed Denali Graham set up the second try, scooping up a loose ball, weaving through a fractured defense and finding Colleen Cribbs for five points. The wing converted for the 12-0 lead.

New York then entered a long passage of possession. Play ricocheted from the goal line to mid-field but stayed in Glendale’s end. Finally New York got the edge it needed when Glendale was shown a yellow card. After several attempts at the line, flyhalf Kristen Siano – so hard to stop on the first attempt – spied a mismatch on the weak side, picked from the base and scored, 12-5 into the break.

Eight minutes after the half, the Merlins got another forwards try, with captain Sarah Chobot doing the dive-over honors, 19-5. And then New York really started to rally. Championship MVP Gio Cruz, who was disruptive all day, charged up field, and Shelby Lin moved the ball quickly to Siano, who put captain Tiffany Faaee into a gap. She passed out of contact to Rebecca Brafman, who stalled two defenders before passing to Emily Magee for the try, 19-10.

Glendale earned a second yellow card at the turn of the fourth quarter, and Siano charged to the try line. Farmer saved that try, but the recycle made it to fullback Jennifer Salomon, who scored on the second attempt, 19-15.

New York was back on the board when No. 8 Tahlia Brody simply went weak off a scrum and ran over the defense for the centered try. Siano kicked the conversion, and those two points would end up being the difference, 27-19.

Glendale had a couple of minutes to work with and got a lift when New York coughed up a yellow card. Farmer, who was so impactful on the day, dove over the line for her second try, and Stolba quickly slotted the dropkick conversion, 27-26. There was time for one more restart. The Merlins held onto possession and continued its attack into New York’s end, and as the ball started to move wide, it was kicked ahead – directly into Magee’s hands. The winger calmly kicked the ball into the touch, and that was game, title, season.

San Diego and Beantown entered the 3rd place match looking for a first win of the championship weekend, and the Surfers started the quest with three first-half tries. No. 8 Matelina Maluia and flanker Sam Pankey connected really well on the run, and the latter dotted down three tries. Megan Foster connected on three kicks, 21-0.

Beantown ended the half with some good possession, which was aided by San Diego penalties. Unfortunately for the Red Conference runner-up, the first 40 ended with a driving scrum and held-up try. But that lost opportunity was salved approximately six minutes after the break, as more Surfers penalties allowed Beantown to stay on attack. Prop Jess Davis then scored a try out of sheer determination, putting her head down powering through defenders. Emily Jones added the extras, 21-7.

The 2016 champions then settled down and ran in two quick tries – Pankey’s fourth and a long-range score from wing Josie Ziluca – 33-7 with Foster’s conversion.

Penalties still plagued San Diego and a yellow card allowed Beantown to continue attacking. This time, Beantown was patient as its five-meter scrum walked across the try line, and Yeja Dunn dotted down for the Jones-converted try, 33-14. But the Surfers had the final say of the match, as Maluia powered over for her second try, which Fosters converted, 40-14 for the win.

It was an all-Blue Conference showdown for 5th place, as Berkeley and ORSU played each other for the third time this season. Berkeley had won the previous two contests and raced out to a 15-0 lead after 25 minutes. Fullback Emma Harbage scored two tries, finishing off wide, fast ball that graced the entire team’s hands. Allie Byrne and Bulou Mataitoga had their scoring attempts held up before prop Elena Edwards found try zone green.

ORSU got into some penalty trouble before the break, at one point being down two players with yellow cards, but did well to escape with relatively little damage. In the second half, the electric trio of Mataitoga, Cathy Cai and Frieda Fetuu did combine for a fourth try, with Fetuu working the final line of defense for the score, 20-0, but then ORSU wrestled away some momentum. Dive-over scores from Hannah Summers and captain Rachel Johnson made it a 20-10 game.

The game was for the taking, and Berkeley responded to the pressure. The All Blues kept the pace high and three tries in the final 15 minutes followed. Wings Maggie Simpson and Courtney Hendrickson scored, and loose forward Christina Ramos finished off breaks from Cai and Mataitoga, winning the foot race to the corner for the final try. Sam Miller added the conversion for the 37-10 win.

A really great game evolved between Twin Cities and Chicago North Shore, the league’s two Midwest teams, for 7th place. Both teams scored a try apiece in the first half, with Twin Cities hooker Emily Jalosuo first, and Chicago North Shore No. 8 Brittany O’Dell answering. But a conversion and penalty kick from flyhalf Kat Stanley gave the league newcomers a 10-5 lead into the break.

The third quarter thrilled with three lead changes. Twin Cities got ahead 15-10 with back-to-back tries from flanker Tupouahau Paea and scrumhalf Becca Brown, and then North Shore sent Anna Cohen-Price into the try zone. Stanley’s conversion saw the Chicago side lead 17-15.

A turning point occurred as the Amazons launched another attacking campaign inside North Shore’s 22, and the pressure forced repeated infringements that resulted in a yellow card. Twin Cities made good use of that player advantage and added 14 points through two Katie Johnson tries and conversions, 29-17. As the clock wore down, Paea added her second try for the 34-17 win.

Atlanta and D.C. squared up for the third time of the fall, this time for ninth place in the league. The Harlequins got out to a 10-point lead as Dominique Purifoy and Ros Chou both scored. The Furies got on the board with a Maggie Olney penalty, and then a Harlequins yellow card saw the penalty tap move to prop Michele Onwochei for the dive-over try, 10-all.

The tie was short lived, however, as Atlanta marched right back down for a Laketa Sutton try in the corner. Outside center Alice Plant – who led a great kicking game along with D.C.’s Olney – made a stellar conversion from the sideline for the 17-10 lead into the break.

D.C. struggled to turn its possession into points in the second half, while the Harlequins used its time on offense for three more tries. Goo
d offloading in traffic challenged the Furies’ defense, and wing Naiomi Cayo-Nelson finished off two good series with two tries. Flanker Caroline Mackey took a Chou offload in for a sixth and final try, and Plant’s conversion ended the game, 34-10 to Atlanta. 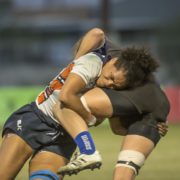