The Women’s Premier League (WPL) has concluded day one of the national championships in Tucson, Ariz. The title will be awarded to either New York or Glendale, while Berkeley and ORSU look to top the 5th place bracket. The championships resume within Kino Sports Complex on Sunday, Nov. 12.

If you made it to the end of The Rugby Channel’s live-stream, then you were greatly rewarded. The final match of the day between San Diego and New York was undeniably the best, with lead changes and high emotion befitting a championship semifinal. The Surfers entered the game as the reigning champion, but New York was eager to set the tone early.

San Diego held onto possession for the opening four minutes, and New York’s first touch of the ball was a batted-down pass. New York No. 8 Tahlia Brody scooped it up and raced away for the opening try. Minutes later, New York lock Misha Green dove over, and flyhalf Kristen Siano’s two (of three) first-half conversions gave her side the 14-0 lead after eight minutes.

San Diego broke the silence with a Laura Easterling try, but then New York answered with another two scores. Siano and captain Tiffany Faaee were really good about getting meters through the middle and offloading in traffic, while Brody and fullback Jennifer Salomon finished the efforts in the try zone. It was still the first half and New York led 26-5.

“We came flying out of the blocks and really got on the front foot, scored some good tries. Confidence was high and then we tried to play too much rugby in the wrong areas of the field,” New York coach James English recalled a turning point. “Credit to San Diego, a classy side who showed the character to come back into the game with some great moments of individual play. Our discipline let us down and that really gave San Diego some great territory. They had the players who were able to make the most of their opportunities.”

San Diego mounted a comeback. An excellent kicking game from Hunter Griendling and Megan Foster set up some good opportunities, and New York’s composure waivered with two yellow cards. Foster scored twice, chasing down a kick and stutter-stepping around the corner. Ever-charging, ever-gaining No. 8 Matelina Maluia took a lineout ball and popped to her feet against an unprepared defense for a try. And wing Josie Ziluca gathered a kick off the ground for a try. Foster’s conversions and a penalty gave San Diego a 32-26 lead heading into the fourth quarter.

However, New York did not break and reclaimed momentum, which culminated in two tries from WPL rookie Natalie Kosko. A final Siano conversion gave New York the 38-32 win and berth to the final.

“We showed great fight to get back into the game,” English praised his team. “Once we were able to get hold of the ball and build some momentum, we looked dangerous again. Some great impact off the bench injected some energy and sealed a narrow but hard-fought win.”

“I think it was a solid performance but we’re still not where we want to be. And that’s O.K. because you want to get better with every game,” Glendale backs captain Jenny Lui reflected. “Beantown has a very good maul and that asked our pack to be physically committed to stopping it. They really stepped up to the challenge and put their bodies on the line to disrupt them.”

The first 15 minutes evolved without a score, but then Merlins flyhalf Hannah Stolba tore down the sideline and worked the two-on-one to put wing Colleen Cribbs away for the try, 5-0. Glendale got its second score after opting for a scrum – a strength – in Beantown’s end. The ball moved wide as Lui sent a final chest pass to Justine Wypych, who stepped her opposite, 10-0.

Penalties hurt Beantown in the first half and negated one of the team’s best attacking opportunities, as two booming kicks from Stolba quickly returned play to the opposite end of the pitch. Lui and Stolba then attacked on the weak side of the ruck, and Carmen Farmer did the rest down the sideline. Cribbs converted for the 17-0 lead into the break.

Beantown played with renewed focus in the second half, and flyhalf Miranda Wakimoto proved an invigorating force. The Boston side also cleaned up its play, and penalties weren’t nearly as disruptive. That said, Glendale stayed steady and methodically worked three more tries: one from reserve Andrea Prusinski that needed the assistant referee’s O.K.; another from forwards captain Sarah Chobot off a driving lineout; and a third from reserve Nichole Wanamaker, who finished off some nice interplay in the loose.

There was a different type of drama in the 5th place bracket. The competitors in the first two games of the day not only had to focus on winning but also needed to run up the point differential. The team with the larger winning margin would advance to the 5th place game, and the winner with the smaller margin would play for 7th.

ORSU made life difficult for the other 5th place playoff teams when it beat the D.C. Furies 56-7. The game was even for approximately the first 10 minutes, as D.C., led by flyhalf Maggie Olney, was gritty in the breakdowns and able to force penalties. But once ORSU started gaining meters through the middle – Paris Hart, Zoe Wilson, Rachel Johnson all reliable for go-forward – and settling into its offload game, the outside opened up and the tries followed. Te Awhina Ho Chee was especially good about putting her teammates into space.

The Jesters had to wait for the outcome of Atlanta vs. Chicago North Shore, and hope the victor did not exceed a 49-point win. But after the first half, it became pretty clear that neither team was going to run away with a victory.

Nearly 30 minutes elapsed before the scoreboard lit up, and it was Atlanta outside center Alice Plant who used a lovely fend to dot down the first try. Chicago North Shore answered right back as wing Christina Schrader shook two defenders for the score, and Kat Stanley’s conversion gave her side a lead it would not relinquish.

The WPL newcomer added two tries from captain Christiane Pheil, two more conversions from Stanley as well as a penalty for the 24-5 victory. While it wasn’t enough for a berth to the 5th place game, it was an important post-season win for Chicago North Shore.

“I’m really proud of the team for today’s performance,” Pheil enthused. “We have struggled with holding onto possession all season, especially with the increased physicality of the WPL. Today, we did a much better job of keeping possession and turning opportunities into points. Going into Sunday, we will need to continue that success and build on it with a better success rate within their 22, and bigger tackles on defense. Overall though, the morale after today’s victory was contagious and we are antsy to get out there on Sunday.”

Chicago North Shore will face Twin Cities in the 7th place match after the Amazons dropped a 41-29 game to Berkeley today. Although the match ended within 12 points of each other, it had wild swings o
f momentum.

Two WPL rookies scored the opening tries: flanker Christina Ramos for Berkeley and prop Lanoira Duhart for Twin Cities. All Blues wing Ardia Kelker showcased her speed along the sideline for her team’s second try and a Bulou Mataitoga conversion gave the All Blues a 12-5 lead heading into the second quarter.

The Amazons then committed two yellow card offenses in the course of three minutes, resulting in a penalty try and opening up a little space for scrumhalf Alyssa Baccarella to dummy into the try zone. That said, Duhart was able to score her second try while her side was down. The momentum didn’t have a chance to build, however, as Berkeley wing Christina Hendrickson’s intercept try closed the half for a 29-10 lead.

Berkeley added tries from Cathy Cai and Mataitoga during the first six minutes of the second half, 41-10, and the game felt decided. But the Minnesota side made really good use of the final 30 minutes, and its superb lineout helped put points on the board. Flanker Rebecca Brown, lock Rachel Hunter-Schlichting and outside center Katie Johnson scored before the buzzer, and conversions from Johnson and Katana Howard capped the scoring. It was just a little too late to overturn the verdict.

“Every player, each week gives everything they have. It’s very humbling to be involved with this group of amazing women,” first-season Berkeley coach Theo Bennett lauded. “They are confident, intelligent, they play for each other, the club, and the position we come from. I cannot think of one player I have that is not worth mentioning in some capacity. I am their biggest fan.”

Tune in Sunday as the teams play for place. Check wplrugby.org for the results and schedule. 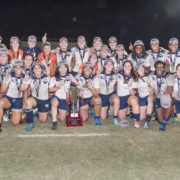 WPL Championship Weekend Day 2: Round Up
Scroll to top