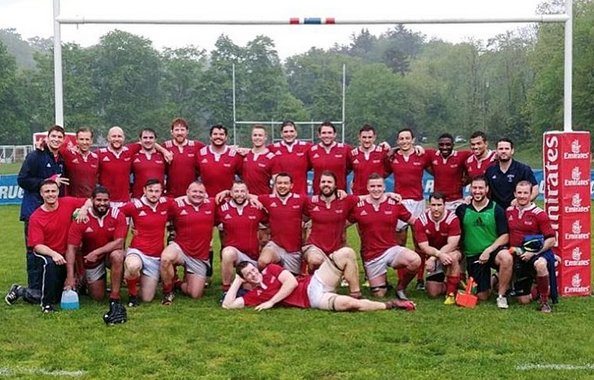 LAFAYETTE, Colo. – Quarterfinals and Semifinals of the Men’s Division I, II, and III Playoffs settled which teams will play for a National Championship at the June 3-4 Club Championships at Infinity Park in Glendale, Colo.

The Quarterfinal between Austin and San Francisco Golden Gate proved to be the best D1 contest out of the West. Northern California’s best team took a one-point lead into halftime before opening the second period with a converted try to go up, 28-20. The Huns, however, would score three consecutive tries to build a 37-28 advantage. The clubs traded scores down the stretch, leaving the Red River Champions ahead on the scoreboard, 48-38.

Southern California Champion Belmont Shore was too much for the Life West Gladiators to handle in the other D1 Quarterfinal in Tucson. Eight different players from Belmont Shore got their name on the stat sheet on the team’s way to a convincing, 39-17, win over Life West.

Belmont Shore’s winning form did not carry over into the Semifinals, though. The Huns rode fly half Timothee Guilliimin’s kicking boot to a 16-8 halftime advantage over the boys from Long Beach, Calif. Eagle flanker Hanco Germishuys found the try zone twice in the second half to keep the pressure on Belmont Shore and help Austin to a National Championship-qualifying win, 54-14.

Little Rock’s season ended in the National Quarterfinals for the second consecutive season after ending up on the losing end in a shootout against the Sacramento Blackhawks. There were four lead changes in the second half alone before the Blackhawks finally outlasted the Stormers, 49-47.

National Championship finalists St. Louis Bombers brought their impressive form in the Frontier Playoffs to Kino Sports Complex. The Bombers needed fewer than 20 minutes to jump out to a 19-0 lead versus the Ventura County Outlaws. The score would be 22-12 by halftime, and the Outlaws gave themselves a chance to win in the end. Fly half Nicholas Walker cut it to a five-point ball game with a try in the 73rd minute, but St. Louis preserved its lead to cue up a Semifinal against Sacramento.

A converted try gave the Blackhawks an early advantage, but that was the only lead Sacramento would posses. St. Louis inside center George O’Sullivan scored four tries, fly half Keegan Neal kicked his way to 24 points, and the Bombers dominated the second half on their way to a 49-26 win.

A second St. Louis side will be making the trip to Glendale. The St. Louis Royals remain undefeated thanks to convincing wins in the Quarterfinals and Semifinals. On Day 1 against the Orange County Ravens, seven tries were scored by seven different Royals. St. Louis held the Ravens to one try and advanced on the strength of a 52-7 win.

The San Marcos Greys saw the Royals’ six tries and raised them by one in their 46-12 Quarterfinal victory over the Chico Mighty Oaks. The Greys ran out of gas on Day 2, however, while St. Louis kept rolling. The Royals piled on eight tries while keeping San Marcos out of the try zone to advance to Nationals, 54-3.

The Midwest Champions, Chicago Lions, moved on to the Semifinals after beating Rocky Gorge. The Mid-Atlantic champs mustered a 17-10 lead before the Lions roared back with tries by John Serdar and Daniel Corci for the 32-24 win.

On the other side of the Division I bracket, 2015 National Champion New York Athletic Club beat reigning D1 Champion Mystic River. NYAC raced to a 25-0 lead before finishing Mystic River’s hopes of repeating, 32-14. NYAC owned the opening stages of the Semifinal, as well. The ‘AC’ bombarded Chicago by scoring the first 22 points of the match. The Lions got on the board when winger Brian Rooney dotted down, but those would be their only points, and NYAC will head back to Infinity Park after a 27-5 Semifinal win.

Three years after winning its last Division I National Championship, Life will have another shot at a title – this time in Division II. Eight man David Gannon scored a pair of tries in the Running Eagles’ Quarterfinal win against the Morris Lions. Meanwhile, a Detroit Tradesmen team determined to get back to the National Championship Final it lost a year ago clobbered the Washington Irish, 67-24, in a game that saw Ryan Koenig, Chris Mentzer, and Emosi Mulevoro each bag two tries.

The Semifinal, which was a rematch from a friendly in March that Life won, 29-14, was even closer than their first encounter. The Running Eagles would find a way to prevail for a second time, though. Jonathan Poole, Daemon Torres, and Marcus Walsh find the try zone, and Neethling Gericke tallied 10 points from the kicking tee in the 32-27 win.

A season after falling one win short from playing in the Division III National Championship game, the Bremer County Bucks are heading to Glendale for another opportunity at a title. The Bucks went over the 60-point mark in both the Quarterfinals and Semifinals.

First, Bremer County disposed of the previously-unbeaten Lehigh Valley Hooligans on Day 1, 68-34. The Bucks nearly matched their 68-point output in the Semifinals by dropping 62 points on South Champion Southern Pines in a 38-point victory.