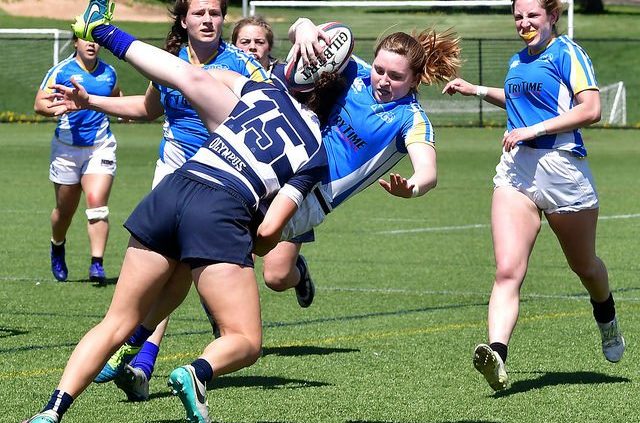 LAFAYETTE, Colo. – A pair of wins during the April 21-23 Women’s Division I Playoffs earned BYU, Life, Lindenwood and Penn State advancement to the Women’s D1 Elite Semifinal bracket of the May 5-6 2017 USA Rugby College 15s National Championships. Meanwhile, Day 1 victories prior to losing on the second day of competition will see Central Florida, Notre Dame College, Stanford and UC Davis into the Women’s Division I Spring Semifinals at the same event at Life University in Marietta, Ga.

BYU is one win away from reaching a second D1 Elite National Championship final. The Cougars received two-try performances from loose forwards Justina Grubb and Grace Taito during a 67-14 win over Chico State to set up a Day 2 matchup against UC Davis.

The Aggies, who shutout Arizona State 96-0 a day before taking on BYU, hung tough with the Cougars for the first 60 minutes of the game, before tries by Taito, Rebekah Hebdon and Lora Gubler stretched BYU’s lead to 44-19 by the final whistle.

The Running Eagles were one of two host teams to win their regional playoff event. For its efforts, Life will remain home for its May 5 D1 Elite Semifinal versus BYU.

Twenty-four tries were run in by the Eagles in their 137-5 demolishing of North Carolina. On the other side of the bracket, Central Florida went back-and-forth with Virginia in the first half, before Cortney Kuehl and Jessica Warner combined for four second half tries for the Knights in a 48-20 win over the Cavaliers.

On Day 2, Life outside center Alexandria Sedrick went off for four tries in the first half to help her side to a 50-0 advantage at halftime. Four different Running Eagles would find the endzone over the second forty minutes, and the hosts celebrated a 78-5 win against Central Florida.

The Nittany Lions will try to win a second D1 Elite National Championship after 2016’s inaugural competition, while Notre Dame College has clinched a semifinal spot in the Division I Spring Championship field following the results at regional playoffs hosted in State College, Pa.

An overmatched James Madison unit allowed 60 Penn State points in the first half of their fixture, before the Nittany Lions poured in 67 second half points in their 127-5 win over the Dukes. Meanwhile, Notre Dame College books travel plans for the May 5-6 College 15s National Championships thanks to 57-5 Day 1 win against Virginia Tech.

Following it’s impressive win over the Hokies, the 2015 Division II National Champions couldn’t keep pace with Penn State. Kyla Chipman and Corinne Heavner each bagged a pair of tries in the first half to help provide 29-3 lead at the break. In the second half, All-American backs Gabby Cantorna and Tess Feury got into the scoring fray, and Heavner added two more, giving the winger 4 scores on the day in the 62-8 win.

A year after reaching the Quarterfinal of the D1 Elite National Championship, Lindenwood has advanced a step further in 2017 after upending Washington State and Stanford over the weekend.

A try by lock Gabriella Drllevich in the seventh minute gave Washington State an early lead over Lindenwood. The Lions, however, would go on to score the game’s next 90 points in route of the Cougars.

Stanford outside center Madeline Wilsone recorded a hat trick before the 30th minute against Arizona, and the Cardinal never looked back in their 68-15 defeat of the Wildcats on Day 1. Lindenwood was by far the fresher team on Day 2, though. A dozen different Lions made their way to the try zone, included Nika Paogofie-Buyten and Renee Gonzolas who each had two tries, and full back Caring De Freitas who dotted down four times in the 103-0 lashing.