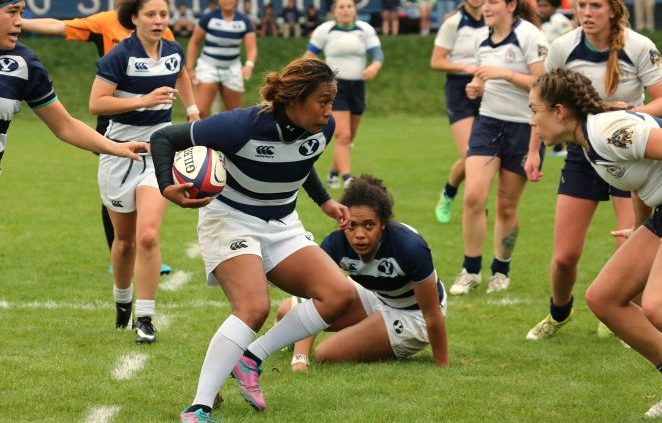 LAFAYETTE, Colo. – Sixteen teams are still in the hunt for a 2017 Women’s D1 Elite National Championship and Spring Division I Championship. Four regional hosts will welcome fixtures representing the national Round of 16 and Quarterfinals April 21-23.

Winners from the first day of regional competition will have clinched a spot at the May 5-6 College 15s National Championships at Life University in Marietta, Ga. Day 2 of this weekend’s playoffs determine which of the national quarterfinalists will play for a D1 Elite or DI Championship at Life University. The four victorious teams from the second day of competition will filter into the D1 Elite Semifinals, while the other half of the Round of 8 field will be a game away from playing for a DI Spring Championship.

The D1 Elite and Division I Semifinals will be contested Friday, May 5, with the National Championship Finals to be played the following day. All four matches will air live and free of charge on The Rugby Channel.

Contenders for two of this spring’s women’s championships, the other being Women’s Division II, include 2016 D1 Elite finalists BYU and Penn State, as well as DI Spring Championship finalists UC Davis and Virginia.

UC Davis vs. Arizona State
The Aggies have only gotten better since hoisting the 2016 Spring Championship trophy last May. Their most recent triumph is a 2017 Pacific Mountain Conference Championship, which they accomplished in dominant fashion.

It might not be fair to single out individuals on a team with championship pedigree, but the return of a pair of lethal ball-runners in the midfield has not hurt the team’s return to the national stage. Erica Hipp and Sydnee Watanabe are the Aggies’ one-two punch in the centers and are as tough a combination to contain in the country.

A loss to Arizona was the ideal ending to Arizona State’s conference season, but the Sun Devils have still had an excellent 2017 campaign thus far. They were 4-1 before losing the conference final to the Wildcats, in a game in which Arizona State had a lead for three-quarters of the match.

Winger Julia Cornella was kept in check in the Gold Coast Championship, but previously against Arizona she went off for a hat trick. She’s one of a number of Sun Devil players UC Davis will want to mark.

Brigham Young University vs. Chico State
It is often easy to recall who takes first place, but the runner up is not quite as mistakable. That could be the case with BYU. The Cougars surprised some by besting varsity program Central Washington by two tries in the 2016 D1 Elite Semifinals. If not for a slow start in the National Championship game against Penn State, BYU may have won the inaugural D1 Elite title after going toe to toe with the 11-time champs for 80 minutes.

The Cougars are without now-graduated Jordan Gray, who was one of the best collegiate players in the country the past few years and is now showing very well for the Women’s Eagles. Still, BYU has a deft roster and an excellent coach in Tom Waqa, who had the team well-prepared to defeat UC Davis on the road, 30-10, in February.

The team’s next collegiate showdown came against Lindenwood. The Cougars were beaten by the Lions in Las Vegas, but the 39-5 score line does not indicate the toughness shown by BYU in defeat. Fortunately for BYU, it enters the national playoffs with good momentum after beating Central Washington again. The Cougars topped the Wildcats, 41-32, two weeks ago in Provo, Utah.

Life vs. North Carolina
Prior to hosting the May 5-6 USA Rugby College 15s National Championships, Life University will host one of four Division I Playoff regionals. Of course, the University’s very own Running Eagles should have a terrific shot of winning two games and return to a second consecutive D1 Elite Semifinal.

Life has balanced both sevens and 15s during the spring semester and have looked sharp in both codes. The year began with a one-point win over a senior club side in the Raleigh Venom, who are in the midst of a very good season. Next the team won home games against the South Independent All-Stars and Atlanta Harlequins before going 2-1 at DC Ruggerfest. In six varsity fixture so far in 2017, the Running Eagles have yet to surrender more than seven points.

North Carolina booked its spot at Life University the unconventional way. The Florida Gators had originally earned the right to a national postseason berth, but after foregoing their bid the Tar Heels snatched it up. North Carolina is not unfamiliar with the postseason spotlight. The team advanced in last year’s playoffs thanks to a 39-31 win over Central Florida before finally succumbing to Virginia. The Tar Heels followed their 15s postseason run with a trip to the USA Rugby College 7s National Championships.

Experience aside, North Carolina must still contend with one of the most talented rosters in the nation. Senior Running Eagle Madison Ohmann is a skilled ball-handler who enjoys targeted dynamic runners Kaitlyn Broughton and Whitney Wilson. In the forwards, Megan Rom can be counted on to lead from the front.

Central Florida vs. Virginia
When it comes to playoffs, Virginia always seems to be in the hunt. The 2016 Spring Championship runner-ups do not typically have the size to bully teams around the pitch. Instead, Virginia relies on a deep and skilled group of players that execute a style of play that utilizes everyone on the field. Not that a program with such high expectations needs any additional motivation, but last year’s last-second loss to UC Davis in the Spring title game must have resonated with the team.

After losing just one conference game last season, Central Florida is coming off of an 8-0 campaign this year. The Knights scored at least 75 points in half of those wins while allowing no more than 14 points in a given contest this season. Central Florida has several weapons Virginia will want to keep an eye on, especially No. 8 Neisha Smith and fly half Jamie Spataro. Smith has tallied eight tries on the season, while Spataro has raced to the try line nine times.

Penn State v. James Madison
Eleven-time National Champion Penn State is still the gold standard in women’s college rugby. Regardless of which future Eagles graduate from the program, the Nittany Lions always seem to have a consistent pipeline of standout players ready to take the reins of the next championship team. This year is no different.

Penn State dominated University of Pittsburgh, 93-0, before departing for the United Kingdom for a week-long tour that consisted of three matches – all Nittany Lion wins. Upon their return stateside, they have stayed incredibly busy. Positive results at Ruggerfest were followed by one-sided wins over the Pittsburgh Angels, Harrisburg, and the DC Furies.

A familiar face in senior Gabby Cantorna remains in the Penn State back line, but at a slightly different position. After years of operating in the No. 10 jumper, Cantorna moves over to inside center to make room for fly half Kayla Canett, who recently earned her first cap for the Women’s Eagles during the Can-Am Series in San Diego. Alongside Canett in the Eagles kit was danger-woman Tess Feury. When in open space, Feury is near unstoppable.

James Madison will not be shell shocked when stepping onto the pitch with the Nittany Lions. The Dukes have been on the stage before, and although it was in sevens, they did face Penn State not once, but twice at the 2017 College 7
s National Championships.

Like several teams in the Division I field, James Madison has been creative in mixing up its competitive schedule with both 15s and sevens matches. Still, the team did not compete at the Life University 7s event before rebounding from a defeat to Virginia Tech to beat Kent State, 17-5, and book a place in the Round of 16.

Notre Dame College vs. Virginia Tech
A second-place finish in the Mason-Dixon Conference was the route Virginia Tech took to the National Playoffs. A dominant 52-point Semifinal handling of James Madison was enough to see the Hokies to the national postseason, but could not fuel a victory in the conference final. University of Virginia upended Virginia Tech, 48-7.

A coaching change has not slowed the momentum growing on the campus of Notre Dame College. The winner of the 2015 Division II National Championship has only dropped one game this season to Quinnipiac. The Falcons’ victories have not come against opposition light on talent, either.

Wins over Norwich, Army, and West Chester have been noteworthy, but no triumphs were more impressive than a 15-7 victory over Life back in September, and a 34-point win against reigning Division II National Champions Davenport University.

Lindenwood University vs. Washington State
The Cardinal are in the mix at the Stanford Regional, but Lindenwood might be the favorite to win a pair of games in Palo Alto, Calif., this weekend. The Lions have continued to improve under head coach Billy Nicholas and ventured on the program’s first international tour in March.

It is not just overseas opposition that Lindenwood has lined up to test itself. The 2016 D1 Elite quarterfinalists have played current National Championship hopefuls BYU, Life, Penn State, Stanford, and UC Davis – only losing to Penn State. In fact, the loss to Penn State in October in the only blemish on the Lions’ 2016-17 record. Most recently the squad from St. Charles, Mo., amassed five wins at Ruggerfest and won the Life University 7s tournament.

With two Division II National Championships under its belt, Washington State has slowly been building is program to compete for the same titles at the Division I level. After losing both its Quarterfinal draw and consolation fixture in 2015, the Cougars outdid themselves last spring. A loss to eventual Spring Champion UC Davis ended any title hopes Washington State had, but the Cougars recovered well to score seven tries the following day to beat UC San Diego, 43-12.

Washington State has proven to be the best side in the Pacific Northwest, but is also further battle tested with games against Cal and Chico State on its résumé, as well as a March tour to England.

Stanford University vs. University of Arizona
A 2015-16 season at Stanford was spent finding its footing under new head coach Josh Sutcliffe and ended in a quarterfinal loss to BYU in the D1 Elite Playoffs. This season, the Cardinal has show plenty of growth and the improvements can be seen in the win-loss column. It lost to UC Davis to begin 2017, but won six in a row before falling again to the Aggies. Unfortunately for Stanford, a third meeting in the Pacific Mountain Rugby Conference Final, again, went to UC Davis, but do not count out a Cardinal team playing at the familiar confines of Steuber Rugby Stadium.

Arizona does not have the esteemed history as Stanford, but a look at its 2017 results is enough to know the Wildcats should not be taken lightly. The team from Tucson, Ariz., had no trouble scoring points on its way to a 4-0 start in the Gold Coast Conference. Arizona lost its first game of the season March 11 to Arizona State.

The Wildcats, however, did not need much time to make the corrections necessary to beat their in-state rival. One week later, in the conference championship game, Arizona overcame first- and second-half deficits to win 24-0 on the strength of a 14-point performance by fly half Brawley McCaslin.