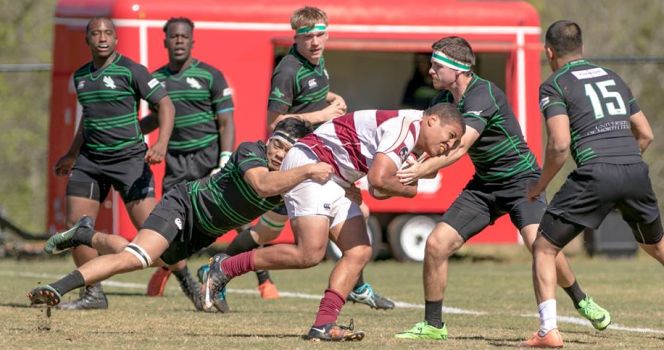 UC Davis’ first win at the West Regional in Bellingham, Wash., was over Long Beach State. Aggie winger Bradley Maples, who scored tries in both of Davis’ Pacific Coast Playoff victories, dotted down twice in the first half against the 49ers to help send his team into halftime with a 29-7 lead.

Second half tries by Jacob Wright, Ari Wargon, and Maverick Bellard created plenty of padding, and the Aggies rolled to a 46-21 victory.

The other side of the West bracket witnessed hosts Western Washington storm back from a 12-0 deficit to take a 14-12 second half lead when Noah Hanks converted John Stone’s 56th-minute try. The Gold Coast Conference Champions, however, produced a comeback of their own. Grand Canyon winger Dru Pelter dotted down with just five minutes remaining in the Spring Quarterfinal, sending the ‘Lopes to a 17-14 win and a Semifinal date with UC Davis.

The Aggies raced out to a 12-0 lead in the April 9 Semifinal before Connor Fischman put Grand Canyon on the scoreboard with a try in the 12th minute. Instead of allowing the ‘Lopes to further close the gap, UC Davis finished the half with Maples’ third try of the weekend – sandwiched between two Joshua Farnsworth penalty kicks – to put the reigning D1AA National Champions ahead, 23-5, at intermission.

Grand Canyon did not return to Arizona before leaving everything it had on the pitch in Washington. Backs Maceo Brown, and Brendon Curle dotted down in the second half to put the ‘Lopes within a converted try of a historic win for the program. Instead, Farnsworth slotted his third penalty of the game, putting the Aggies’ lead out of reach and sending them to the Spring Championship Final, 26-17.

In Spartanburg, S.C., Florida State outlasted North Texas in what was not only the best game of the East Regional, but the entire D1AA Spring Playoffs.

Six lead changes highlighted a back-and-forth fixture between the Seminoles and Mean Green. It appeared the South Independent Rugby Conference Champions built a big enough lead following a converted try and penalty by Ruiz to put Florida State up, 30-21, with just over 15 minutes remaining in the Spring Quarterfinal.

Still not done, North Texas amounted enough pressure to score another try to pull within just two points of the Seminoles. Florida State, however, held strong for the final 10 minutes of the game to preserve a 30-28 win.

“We played with confidence and trusted our teammates, as well as ourselves, to do our jobs like we had practiced,” Ruiz added.

Elsewhere in Spartanburg, Heart of America Champion Missouri welcomed multi-try performances by Adam Cooley, Nicholas Romano, and Kellen Shockley en route to a 55-17 win against the Ivy League’s Brown University to set up a Sunday showdown versus Florida State.

In a bit of a surprise, the East Regional Final was far from competitive. Florida State forwards Kody Boswell, Damien Maradona, and Robert Schrage did well to neutralize the size and strength of Missouri’s pack. The Seminoles led by just 10 points at halftime, but Missouri’s inability to get out of its own end assisted in allowing four Florida State tries in the second half and a 38-0 shutout to propel the school to the April 22 Spring Championship.

“The reality is our team really enjoys playing rugby with each other and it was evident on the pitch over the weekend,” Ruiz said of the club.

The recent history for the two D1AA Spring Championship finalists could not be more opposite. UC Davis is one win away from reaching a third consecutive National Championship Final after winning the D1AA title in both 2015 and 2016. Florida State, on the other hand, won just one conference game a season ago and is in the midst of a remarkable turnaround for the program. Whichever team is victorious April 22 at Stanford University will play Fall D1AA Champion Notre Dame College at the May 5-6 USA Rugby College 15s National Championship. The D1AA National Championship match at Life University will be broadcast live on The Rugby Channel.