Though the first Canada Cup, held 10 months out from Women’s Rugby World Cup 1994, gave the Women’s Eagles cause for concern in their forwards play, the seeds planted in the three-match competition came to fruition once the big-time matches were played. For a reinvigorated team now hungrier to regain its World Champion title, yet another matchup with Canada – against whom the Eagles were 5-0 – in the ’96 Canada Cup was just a bonus; New Zealand was coming to town.

The Black Ferns had carried an expectant swagger into the ’91 World Cup Semifinal loss to the U.S., but had a different look about them in Edmonton. According to former New Zealand captain Farrah Palmer, the program’s motto in the ’98 quadrennial was “professional on and off the field.” Seeing as how the female rugby players in the dominant rugby nation were fighting for support from the New Zealand Rugby Union and finally received it in 1995, it was imperative they conduct themselves properly on tour.

The Eagles, on the other hand, had at least received recognition from their union for several years. Issues related to domestic competition structures and funding, however, saw a less-than-fit squad selected for the post-summer Canada Cup.

“I had visited them . . . and saw how they were working; I knew what we were up against,” Head Coach Franck Boivert (1993-98) said of Darryl Suasua’s Black Ferns. “But we had no means whatsoever to pay players, have camps, etc. It was very amateurish, the way we prepared for the Canada Cup.”

The U.S. opened the tournament with a defeat of France in the countries’ first-ever matchup, but lost for just the fourth time in 21 games in the second-round matchup against New Zealand. The score line was an incredible 88-8, the largest of the Eagles’ defeats to that point.

“That was a big eye-opener because they were so professional and so advanced technically and physically,” Boivert recalled. “We came into the tournament quite unfit – it was September so most of the athletes had not trained properly and so on. We had a big shock when we played New Zealand.”

New Zealand would go on to finish the competition undefeated with a combined score line of 283-11, while the Eagles finished off the week with a sixth consecutive Can-Am victory. They were not exactly the free-wheeling team that had reached a second World Cup Final two years earlier, but the Eagles were becoming a more rounded team for a more “official” World Cup.

A seventh triumph over Canada in 1997 preceded a narrow victory against Australia on a tour “Down Under,” after which Boivert finalized the team traveling to the Netherlands. The Eagles were grouped with Russia, Spain, and Wales in the third WRWC, but would only have to play two matches for Quarterfinal seeding. 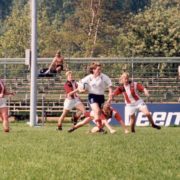