Head Coach Franck Boivert stayed on with the Women’s Eagles following the ’94 World Cup, stabilizing the program through the “off years” and avoiding the turnover between the first two world championships. The U.S. athletes had executed his attacking game-play philosophy brilliantly in Scotland – outscoring opponents by a tournament-best seven-to-one ratio with 387 points scored – but failed to excel at scrum time and in set pieces against England, leading to the runner-up result.

Veteran players like Barb Bond and Candice Orsini were still more than fit and qualified for Eagle duty having already represented their country at two Women’s Rugby World Cups. Boivert was not going to return to the Inter-Territorial Tournaments for exclusive team selections, though, instead traveling around the country to see what the clubs and colleges had to offer.

I didn’t use the ITTs as a selection vehicle because I could see there was a big need to renew and rejuvenate the team. Therefore I went to all of the tournaments, all of the places I could to look for new, young players to keep the same style and same philosophy in the team. Franck Boivert, USA Women’s Eagles Head Coach (1993-98)

As much as he was focused on preparing for the end of the latest quadrennial, however, Boivert was interested in ensuring the up-and-coming female talent in the country had more international opportunities prior to senior selection to better serve future Eagle teams.

In the first two years following the ’94 World Cup, Boivert created the first under-23 women’s national team. He appointed a one Peter Steinberg, the head coach of the Pennsylvania State University Nittany Lions, to lead the program, with the Frenchman connecting the pathway from age-grade to senior.

Beneficial to the Eagles, too, was Boivert’s reach in the worldwide rugby community. Since the Eagles had not seen New Zealand play since their ’91 World Cup encounter, he thought it best to reach out to friend and recently-hired Black Ferns Head Coach Darryl Suasua for a visit. What Boivert found in the Land of the Long White Cloud was a powerful rugby nation whose women’s program had been quietly hard at work away from the watchful eyes of the Northern Hemisphere.

New Zealand had only played three matches against a newly-formed Australia team between 1991 and 1996, the year the Black Ferns were to travel to Edmonton, Alberta, for the latest rendition of the Canada Cup. The Eagles joined their ’91 Semifinal opponents as well as Canada and France in their first competitive action since the ’94 Final. 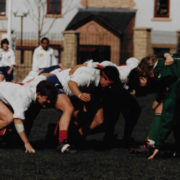