England had its coveted Women’s Rugby World Cup championship after a smart defeat of the USA Women’s Eagles in Scotland in 1994, and those involved in the advancement of international women’s rugby again showed the world they did not need the sanctioning of the game’s global governing body. That made two self-funded, successful events in three years – and three potential hosts – one tournament fewer than the then-International Rugby Football Union had supported for the men’s game.

Roughly seven matches a year between the inaugural ’91 WRWC and the second three years later were played between women’s national teams compared to the five or so played annually from the first test in 1982 to April 1991. The growth of the game – there were 20 nations competing by 1995 – and willingness of players, administrators, and fans to put careers and savings on the line to showcase it eventually swayed the IRFB to financially and promotionally back an “official” WRWC.

Set for 1998 in the first full, four-year quadrennial, the Netherlands regained its WRWC hosting rights having deferred in 1994 sans IRFB consent. The country’s national team kicked off the international initiative with the first test in ’82 and won two of four matches in Wales in ’91 to finish tied in seventh, but had neglected to send a team to Scotland in ’94. It was not the only one, as the tournament was northern hemisphere-only without New Zealand, a ’91 Semifinalist.

Australia wasted no time in getting its women onto the pitch internationally following the ’94 event, inaugurating the Wallaroos five months later in September. Though they were less than competitive in three matches against the Black Ferns through 1996, they were one of the 16 nations invited by the IRFB to compete at the WRWC. Additional first-timers included Belgium and Germany, with old hands England, France, New Zealand, and the U.S. separated in the tournament’s pools. 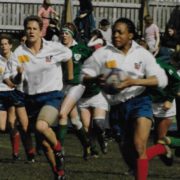