Head Coach Mike Friday’s Men’s Eagles Sevens lost forward Brett Thompson to injury in the build-up week to last weekend’s HSBC Wellington Sevens and have made on addition to the squad of 13 in Chris Coyle for the tournament in Australia. The event can be viewed live in the United States on World Rugby’s website.

Without Thompson, the Eagles were down to 11 players heading into their first match at Westpac Stadium. Local U.S.-eligible athlete Pago Haini was called into the squad and made his Series debut for the U.S., which ended its weekend in the Challenge Trophy Semifinals.

Having put themselves behind the eight ball in Dubai to open the season, the Eagles stuck with a determined France team coming off of a Challenge Trophy victory in South Africa to earn two pool points with a draw in Wellington. The winning performance against Samoa – utilizing the same starting seven – was not by a wide enough margin with New Zealand still on the docket, and the home side’s late win kept the Eagles from the Cup Quarterfinals.

Perry Baker was taken out of the final pool match early after landing awkwardly in an attempt to keep the ball in play. Carlin Isles – in his first Series tournament since March 2016 – moved into the starting lineup for the U.S.’s Challenge Trophy Quarterfinal against Japan. The surprising Rio 2016 medal quarterfinalists benefitted from Eagle penalties to take a lead at halftime, but had no answer for Danny Barrett, whose brace of tries sent the Eagles to the Semifinals. Baker was able to return to the team on day two to bag his third try of the weekend in the losing effort.

Haini received minimal playing time as Friday’s squad channeled their attack through a similar group of seven throughout the tournament, and is included in the Sydney squad along with Arizona State University graduate Coyle. Coyle, a football player in Tempe, Ariz., moved over to Australia in 2015 to play his way into the Brumbies’ Super Rugby team. He has been on the Eagles’ radar since the move and will get his first opportunity to wear the U.S. jersey this weekend.

Despite missing more action than he would have liked in Wellington, Baker kept his name on World Rugby’s DHL Performance Tracker with his play in the fourth round. Accumulating more than 50 carries and 28 tackles in 16 games, Baker is tied for sixth in that table. He and captain Madison Hughes are also in the top 20 on the Series in scoring with 65 and 62 points, respectively, while Hughes’ 21 conversions place him in 11th.

Argentina finished Wellington in fifth with an impressive defeat of the home-town Kiwis in the Fifth-Place Playoff, its best performance thus far on the young season. Santiago Gomez Cora’s team has scored 343 points and a fifth-best 55 tries to hold a ninth-place standing after three rounds. Argentina has yet to face the Eagles this season, and will get its first opportunity to open Pool D play Friday night.

Canada ended Argentina’s hopes for a Cup Final appearance in New Zealand in the Quarterfinals before reaching the Bronze Medal Match. A mostly-unchanged squad from a disappointing start to the Series found its stride in Wellington, winning its pool before a second matchup with Scotland kept the U.S. border rival from a medal. Another first for the season, Canada will play the Eagles second in Pool D.

Russia retained its spot on the Series with a seven-point buffer in the standings ahead of Japan to finish the 2015-16 season, but has failed to truly impress in 13 tournaments as a core team. Having not reached the Cup Quarterfinal once in that span, the Bears have been on the receiving end of unfavorable pool draws. Russia was shut out by Canada in pool play last weekend and scored a few tries in a losing effort against the U.S. in Cape Town.

The Sevens Series broadcast is available to viewers in the United States live on World Rugby’s website. The Eagles kick off their campaign against Argentina at 5:30 p.m. ET Friday and play Canada for the first time this year at 8:58 p.m. before a break in the action for the Women’s Sevens Series knockouts. Pool play will conclude for Friday’s team at 2:23 a.m. ET. 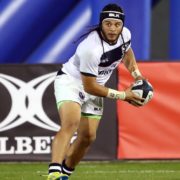