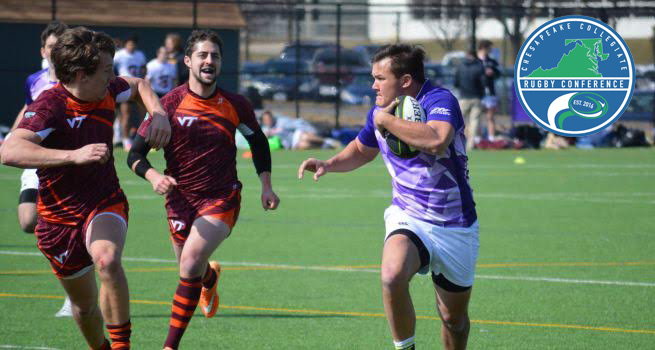 LAFAYETTE, Colo. – Anyone familiar with the state’s rugby community knows Maryland continues to have an unwavering tradition of organizing and playing rugby at a high level. That is one of many reasons the Jan. 13-15, 2017, National Development Summit is being held in Baltimore.

Collegiately, the region has made recent strides in improving its Men’s Division I competition. The Chesapeake Collegiate Rugby Conference recently completed its first season after announcing its formation last February. The conference is made up of nine schools residing in either Maryland or Virginia.

Mark Lambourne, who is the head coach of Chesapeake’s inaugural champion, James Madison University, and the conference’s director of the Board will be one of two dozen NDS presenters, and is proud of the collective effort of the nine-team competition.

“I think it went as well as anyone could have expected it to and better than most people’s expectations,” Lambourne said. “I think the teams showed they were very competitive, and every game was a tough game.”

Lambourne used the University of Maryland as an example to demonstrate how competitive the season went. The Terrapins finished with a less-than-desirable record of 2-6, but three of their matches were decided by a single point, and over half of their games’ outcomes were separated by 10 points or less.

The teams within the Chesapeake Conference assembled from a range of backgrounds. Salisbury University and Towson University have been perennial Division II powers seeking a new challenge, while Mount St. Mary’s University was coming off of a National Championship victory out of the National Small College Rugby Organization and also felt a step up in competition was in order.

The dissembling of the Atlantic Coast Rugby League meant new competitive arenas were required for University of Maryland, University of Virginia, and Virginia Tech. University of Mary Washington was just added to the school’s list of supported sports under the Department of Athletics and needed a competition suited for its enhanced program. Meanwhile, James Madison moved up to D1AA in 2015, winning the Keystone Rugby Conference. However, the Chesapeake Conference made much more sense to the Dukes.

At present, not every Chesapeake side sees eye to eye in terms of on-field ability. However, each of the nine teams is committed to building its program through numbers. Chesapeake representatives carry at least two full sides, with the conference’s B-side competition being tracked in the Futures Cup – a standings table for B-side fixtures that adds additional incentive for developmental contests.

The method of having a formal B-side, or Futures, competition has encouraged each team to beef up its overall numbers. Chesapeake Conference teams currently average 57 registered playing members.

“You can’t build programs around 30 guys because there are injuries in this sport and other things the kids do,” Lambourne debunked. “You’ve got to be able to carry at least 50 players and that was something that we required of our programs. All of the teams have to have at least 50 athletes.”

The formation of the Mid-Atlantic’s newest collegiate rugby conference is not only commendable because it increased the level of competition the teams had previously seen while lightening the season’s travel expenses, but the nine schools also have an eye on the bigger prize. They want to be viable and high-performing links between high school and club rugby.

Relationships are being built in the greater Chesapeake area between high school rugby programs and the nine CCRC programs. Gonzaga College High School in Washington, D.C., for instance, is one of the best programs in the country but has shied away from encouraging its top players from continuing their rugby careers at colleges in the region for fear of stunting the athletes’ development. Now, with the growing improvement of Chesapeake’s college teams, Lambourne says James Madison has been receiving a steady flow of Gonzaga graduates in recent years.

The other part to being a sufficient link from high school to club rugby is the associations made between college and senior sides in the region. The Chesapeake Conference has gathered and delivered the name and contact information of each – not just seniors – of its registered players to the Capitol Rugby Union. This allows any senior club team within the geographical union to reach out to players of their interest and begin to create relationships between the student-athletes and nearby clubs.

For example, James Madison has set the foundation for a lasting relationship with Northern Virginia RFC. Several Dukes spent the past summer playing sevens with NOVA, making a permanent transfer to the club after graduating far more seamless.

“They may not be the next Blaine Scully, but they’re going to start rolling into club programs,” Lambourne said of the depth of players within the Chesapeake Conference. “Now all of a sudden we’ll have this flow of players who just like to play rugby going onto clubs that we need to have desperately.”

If that is not enough, the conference is looking after the development of a whole other avenue of the sport – refereeing. Each season, every Chesapeake squad must send at least three of its own into USA Rugby referee training.

“The lack of referees is alarming. So, we’re going to do our bit to build our own stable of referees and assistant referees,” mentioned Lambourne.

One final point, and one that Lambourne will highlight at the Jan. 13-15 National Development Summit, is the importance of rivalries; how they can benefit college rugby programs and how quickly they are forming within the Chesapeake Conference. Close proximities to conference foes and the student body’s familiarity with the opposing teams have drawn crowds to Chesapeake matches that teams had not had the pleasure of playing in front of previously. This means people who had previously never been exposed to rugby are now getting an up-close introduction.

After a fall season that saw James Madison win the conference’s first title and be joined by Mount St. Mary’s in the D1AA Playoffs, the Chesapeake will turn its attention to sevens in the spring. Three tournaments restricted to conference members will decide a Chesapeake 7s Champion and automatically qualify a team to the 2017 USA Rugby College 7s National Championships. There will also be a slate of three “open” sevens tournaments. These will be available for any college team to join in order for the conference’s members to vary its competition.

Additionally, programs will continue to go head to head in 15s during the spring semester using developmental sides. This will allow players with less experience to better prepare themselves to make a bigger impact come next fall. There are also plans in the works for a Chesapeake select side to face all-star teams from the Ivy Rugby Conference and Keystone Conference with the hope of showcasing the league’s top players.

The excitement of the participating teams has only grown since the conclusion of Chesapeake’s 15s season, and one outside program has already inquired about joining the conference’s ranks. For the more than 250 NDS attendees, they have the opportunity to hear from one of the conferences architects, Lambourne, on the following topics that will only help the Chesapeake thrive:

It is not too late to reserve your spot at the 2017 National Development Summit, and there is no better time to register than right now. The “Give the Gift of Rugby” campaign is going on now through Dec. 23. For each NDS registration between now and Dec. 23, USA Rugby’s Rookie Rugby program will donate a Rookie Rugby ball to Washington DC Youth Rugby. Additionally, use the discount code GIFTOFRUGBY2017 when registering by Dec. 23 to receive a $20 discount.

Save the Date: Meet the Eagles BBQ Dinner
Scroll to top