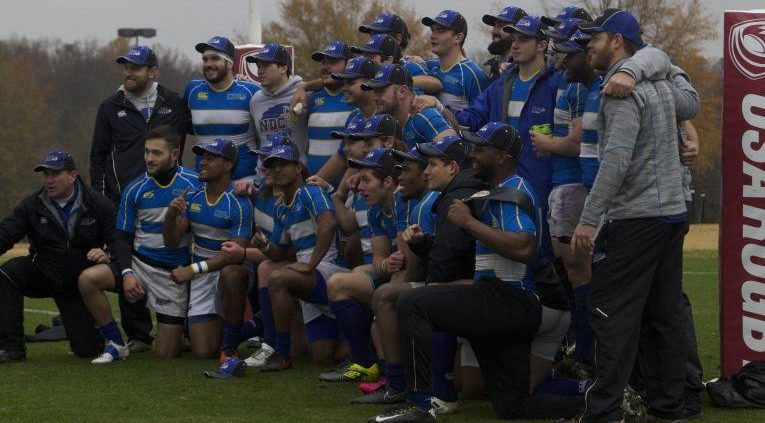 The victorious Falcons gave up a late lead in the 2015 Final in Moraga, Calif., earlier this year, and knocked off a few prestigious collegiate and senior club programs this fall in building a run to the Fall Championship. They kicked off the 2016 USA Rugby Fall Collegiate Championship event’s Finals day in Greenville, and will await their May 6, 2017, National Championship opponent from the Spring Championship playoffs held in April.

Notre Dame took a first-half stranglehold with four tries in the first 25 minutes, started by wing RoNeil Reynolds and finished by flanker Cian Grendon’s brace. Fly half Cory Graham was dangerous throughout the 70 minutes he was on the field, posing a danger to the opposition Falcons on the gain line and spreading the ball effectively to his backs in space. He scored his team’s second try as it built at 24-3 lead in less than dry conditions.

“Bowling Green’s always tough and they’ve always been big boys so it was hard,” Graham said. “When you see somebody break like [Reynolds did] and then the momentum keeps going, we feed off of that. We don’t stop, we don’t put on the brakes; just have to keep going.”

Not threatened by the thunderous conditions that moved over South Carolina overnight, Notre Dame was hardly slowed by Graham’s trip the sin bin 10 minutes into the second frame, adding a penalty kick from scrum half Logan Weinstock midway through the player-disadvantage.

Inside center Adam Regini held off a few defenders as he crossed midfield in the 60th minute, and Graham supported before sending the final ball on the break to wing Charles Winn for a 34-3 lead. As the final frame wound down Bowling Green spent more time with possession, rewarded by prop Phillip Bryant’s try four phases after a five-meter quick tap. Substitute Christopher Labadie would add a third try to Bowling Green’s Final tally in the final minute of the game, but Notre Dame No. 8 Andrew Guerra nullified one with a 73rd-minute score to bring the outcome to 39-17.

“It feels real good – it’s been a long season,” Graham said. “It was really a test. This is going to help us get to that place where we need to be so we don’t lose again. I’d hate to lose again; we can’t lose two years in a row. We just have to work hard and prove we are National Champions.”