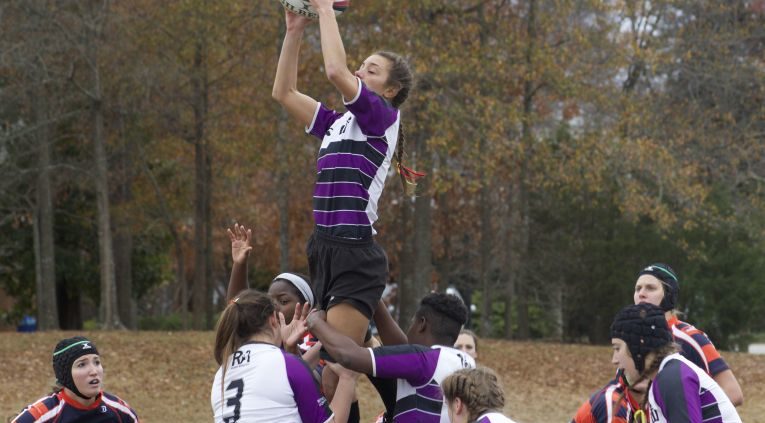 Greenville, S.C. – Davenport will have the opportunity to defend its Women’s Division II Fall Championship after defeating a resilient Vassar College side. The 2016 National Championship-winning Panthers will be up against a familiar foe in Winona State. The two schools will contend for the Fall Championship for a second straight year after the Warriors smothered the Coast Guard Academy, 45-5, in their Semifinal.

Davenport appeared on its way to its own one-sided blowout after scoring the game’s first 19 points. Vassar, however, punched back.

Mariah Ghant stopped the bleeding with a converted try at the 17th minute. Davenport quickly went back on the offensive with a Hannah Tennent penalty kick and conversion that followed Danielle Ordway’s third try.

With the game at risk of getting away from Vassar, flanker Nathalie Freeman and full back Rachel Elson finished the first half with consecutive tries for the Brewers before Jennie To initiated the second half scoring at the 43rd minute to make the score 29-22 in favor of the Panthers.

Vassar stayed within striking distance of the Reigning National Champions by trading tries midway through the second period, but Ordway’s fourth try of the game in the 71st minute unofficial closed the door on the Brewers before eventually celebrating a 47-32 win.

Winona State, on the other hand, jumped out to a 19-point lead and kept its foot the peddle for 80 minutes. Inside center Lachen Ester’s second try of the game closed the first half scoring, and left the Warriors with a 31-0 advantage at the break.

Esters would complete her hat trick early in the second half, and wing Rachel Hannigan added her second try to balloon Winona State’s lead to 45-0.

Even with a Semifinal victory out of reach, Coast Guard kept its attacking structure and never backed down defensively. Bears lock Cherokee Strickland was eventually rewarded for her numerous crunching tackles on defense when she stretched over the line in the 65th minute to get her squad on the board.

If the 2016 Women’s Fall Championship Final between Davenport and Winona State is anything like last year’s rendition, then fans in attendance at Furman University in Greenville, S.C. will be in for a treat. Last December, the Panthers and Warriors were tied late into the second half before Davenport eventually found a way to finish off Winona State, 27-22.

The Sunday, Dec. 4 USA Rugby Women’s Division II Fall Championship Final will kickoff at 3 p.m. ET and be available to watch on The Rugby Channel.

Falcons of Notre Dame slide into National Championship with Fall victory over...
Scroll to top