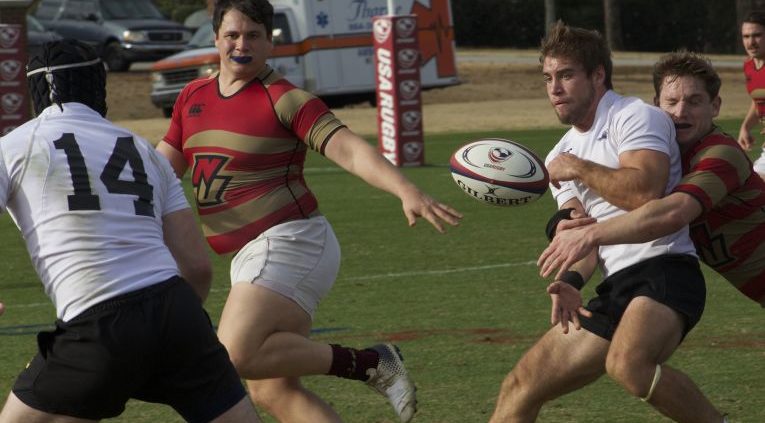 In the first of two Semifinals, Norwich made its intentions known by sending wing Mark Hill into the try zone before the 10-minute mark. A Keegan Frick penalty kick four minutes later increased the Cadets lead, 8-0.

Wisconsin-Whitewater found its footing when Robby Sindic’s well-time pass in pace gave Garrett Shibilski the momentum to streak into the corner for the Warhawks first score. Two more Whitewater tries by the 27th minute created a 17-8 advantage for the 2011 National Champions.

A trio of scores concluded the opening half, two being dotted down for Norwich to cut Whitewater’s lead to just two points, 24-22.

It was the Warhawks who controlled possession to open the second half and used it to score tries through Alec Treuthardt, Shay Haase and scrum half Timmy Grams. The Cadets fought hard throughout the 80 minutes, eventually adding to its score total thanks to Thomas St. Pierre’s try. Still, Wisconsin-Whitewater’s championship experience proved valuable in outlasting Norwich, 58-29, to reach its third consecutive Men’s Division II National Championship game.

Furman surprised Minnesota-Duluth, as well as its home fans, with a deep drop kick by Matt Newman that bounced off the crossbar and through the uprights for a quick 3-0 lead.

After initially being starved of possession, Minnesota-Duluth recorded back-to-back tries through the hands of Matt Martin and Jack Mageto.

Trailing 12-3, Furman used a couple friendly bounces to help lead to a flurry of tries. Adam Miller, Austin Willis, Jeffrey Rein and Matty Newman streaked across to line to build a 29-12 lead. The Paladins looked like they would enter the halftime break with its 17-point advantage, but the Fighting Penguins scored a crucial try before the midway whistle – this one scored by winger Nemuel Nyangaresi.

Minnesota-Duluth silenced the crowd when Martin scored his second try, slicing the host’s lead to 29-22. A penalty kick by Furman produced some breathing room, but Eric Elsner’s 57th-minute converted score brought his Fighting Penguins to within three of the challenger.

Poor handling of the ball cost the reigning National Champions down the stretch, and Furman stifled Duluth to claim its 32-29 win.

Furman and Wisconsin-Whitewater move forward to the Dec. 4 Men’s Division II National Championship game in Greenville, S.C. The two title contenders will do battle at 1 p.m. ET and will air live on The Rugby Channel.

Falcons of Notre Dame slide into National Championship with Fall victory over...
Scroll to top