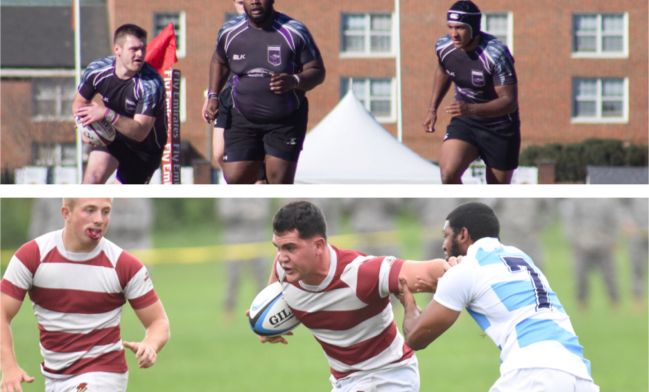 Half of the remaining 16 teams in the hunt for a National Championship will assemble at Founders Field in Pittsburgh. Bentley University, Illinois State University, Norwich University, and Rowan University will each battle out of the Mid-Atlantic Regional with the hopes of becoming a Semifinalist, while Coast Guard Academy, Middlebury College, University of North Carolina at Charlotte, and University of Wisconsin-Whitewater hope to emerge from the Northeast Regional in Pittsburgh.

Norwich is set to return to the National Playoffs after a three-year postseason drought. The Cadets won their first-ever Northeast Collegiate Rugby Conference title in undefeated fashion, but still worked plenty hard for the NECRC Championship. Three of Norwich’s eight conference wins were decided by a single digit.

“We are excited to be going to Pittsburgh,” said Norwich Head Coach Bob Weggler. “No matter what conference you are in it is about one game at a time. It is all about execution on the day. So far we have been able to do that.”

Just seven days after completing its undefeated regular season by easily handling New Hampshire, 72-33, Norwich will take on Bentley in the Quarterfinals.

2014 Rugby Northeast Champion, Bentley claimed the same title this fall, but a little bit of math was required before crowning the Falcons. The end of the regular season concluded with Bentley sharing a 7-1 record with two other sides – Providence and Southern Connecticut. With identical overall records intact and an equal head-to-head mark of 1-1 between the three teams, Bentley’s superior point differential in contests against Providence and Southern Connecticut decided the Rugby Northeast Championship to the Falcons.

Bentley, however, still had a job to do after the dust had settled in the Northeast. The Falcons played Upstate New York Champion SUNY Cortland Nov. 13 for a place in the Round of 16’s Mid-Atlantic Regional. Led by a two-try performance by blind side flanker John Tascione, Bentley stormed back from a 19-10 deficit to prevail, 31-19.

Norwich acknowledges that it doesn’t have much intel on its Round of 16 opponent.

“I do not know much about Bentley, but any team that makes it this far will be challenging,” said Weggler.

But the Cadets are sure they have several playmakers on their own team. Winger Mark Hill, loose forward Eric Pierone, and scrum half Tom St. Pierre combined to score 25 tries for Norwich this season.

Rowan is in a very familiar spot. The Profs are perennial Division II contenders, and will have to win two games over the weekend to surpass last year’s appearance in the National Quarterfinals, where they narrowly lost to Towson, 44-41.

Rowan’s success continues to rely on an expansive style of play that encourages to players to move the ball from touch line to touch line.

“We try to use the entire field,” explained head coach Curt Gruber. “Our No. 10 is our field leader, but we’re a balanced team.”

The standout fly half Gruber is referring to is Mike Ehrlich. Not just an unquestioned leader, Ehrlich is a playmaker and accurate kicker. During last year’s Round of 16 and Quarterfinals, Ehrlich combined for two tries and added 23 points from the tee.

Rowan’s Round of 16 opponent, Illinois State, is not quite as accustomed to postseason rugby as the Profs, but that does not mean the Redbirds are any less deserving to be sitting at the Playoff table. A second-place finish behind the National Championship runner-up from the past two years, Wisconsin-Whitewater, in the Wisconsin-Illinois Conference was already pretty impressive. Then Illinois State went on to beat a good Grand Valley State rather easily, 41-17, in a play-in match to advance the Redbirds to the Round of 16.

“We do know they play in a tough conference and we expect a strong effort from them on Saturday,” Gruber said of Illinois State.

There are not many holes in the Redbirds’ lineup, but there are a few players who Rowan would be wise to key in on. The team’s forwards are good in the loose, especially open side flanker Josh Uthe, who scored twice against Grand Valley State last week. Christopher Audino is also a formidable threat out of the back three. The full back can run but made his presence felt against Grand Valley State by slotting a penalty kick and making good on four out of six of his conversion attempts.

University of Wisconsin-Whitewater vs. Middlebury College

Given all of the postseason success they have accomplished in recent years, it would not be a complete shock if the team let its guard down during a slate of conference games that does not put Whitewater under huge amounts of pressure. Instead, the Warhawks, again, went undefeated during the regular season before besting Northern Iowa by 76 points in the Wisconsin-Illinois Conference Semifinal, then shook off a slow start to beat Illinois State in the Final, 45-11.

“Most of the players have experienced the increase in postseason skills of our opponents,” said Wisconsin-Whitewater coach Pat O’Connor. “The coaches, team leaders, and alumni remind the players of this before each match. I think that gives them focus.”

Not only are the Warhawks focused, but they are stacked with talent – especially in the backs. Club president Eric Pachowitz returns but in a new shirt. The team’s full back the past few years, Pachowitz is now in the No. 10 jumper. Aiding Pachowitz’s transition to fly half is his accurately-distributing scrum half Tim Grams, while Robby Sindic remains the teams primary option in the midfield at outside center.

Whitewater is the odds-on favorite to come out of the Northeast Regional and book a third consecutive trip to Furman University for the Fall College Championships, but Middlebury still has its attention. The two teams have not played each other in five years, but the Whitewater staff recalls a rugby program that will not be an easy out.

“They were a disciplined team that executed the basics well and played at high pace for 80 minutes,” recalled O’Connor. “I expect the same out of them this year. We know that every team we face wants to defeat us so they can move on.”

This year’s Middlebury team is likely more resilient than the one O’Connor remembers playing in 2011. The Panthers looked more likely to be heading for life support than a postseason berth after its 1-4 start in the Northeast Collegiate Rugby Conference. Instead, the team – led by senior co-captains Kyle Dickey and Jake Feury – closed out the season with three consecutive wins to finish second in the conference behind Norwich.

Middlebury’s mission was not yet complete, though. The second-place finish was only good enough to earn the Panthers a play-in game against Plymouth State. Having to travel to Plymouth State for the must-win game, the cards were once again stacked against Middlebury. Refusing to be denied, the Panthers won their fourth straight game to take their seat in the National Round of 16.

Coast Guard Academy vs. University of North Carolina at Charlotte

If it were not for Southern Conference rival and fellow DII Playoff participant Furman, UNC-Charlotte would be entering the Round of 16 undefeated. Its eight-point loss to the Paladins at John Roberts Rugby Complex in Greenville was the 49ers’ lone loss of the regular season, setting up a rematch with Furman in the Southern Championship match. The rematch, also played on the Furman campus, did not go Charlotte’s way, and the 49ers were defeated, 44-20.

Unlike UNC-Charlotte, the Coast Guard Academy did not run into a conference foe it could not handle. The Bears are riding a 7-0 record in which they have not given up more than 10 points while averaging more than 53 points per contest. The eye-popping statistics led to a New England Wide Collegiate Rugby Conference Championship in the team’s first season in the conference.

The fall’s impressive results, in part, can be attributed to a reintroduction of “pack-centric attacking phases” after the coaching staff got away from that style in order to better suit the program’s lack of size and enhanced speed and fitness.

“Last year we were very one-dimensional since I’d eliminated the pack elements at the breakdown in attack,” explained Head Coach Crist Holveck. “This year we brought them back with a greater knowledge of how we can make pack-centric plays effective. Versatility in the attack is our style.”

Being a military academy, the roster is chock-full of leaders, but none more important than captain Caleb Tvrdy. Playing at inside center, Tvrdy is a generous distributor who can also plant his boot in the ground and run past defenders.

“He’s a very selfless player and gives away the ball for the greater good,” complimented Holveck. “Alternatively, when he does decide to have a go he can be a challenge for the defense.”

There is no denying Coast Guard is brimming with confidence at the moment, but it still carries plenty of respect for its Nov. 19 Round of 16 opponent. In fact, the Bears took notice of UNC-Charlotte’s play-in victory over the Virginia Military Institute. It did not come easy, but the 49ers were physically prepared and won the battle of the second half to claim a 45-34 victory and a place in the National Playoffs.

The ability to outrun a military academy definitely caught Coast Guard’s attention, but that is not the only aspect of the 49ers’ game that has the Bears prepping for a match that will not be conceded until the 80th minute.

“My players have to be mindful that the game won’t be won by halftime,” Holveck added. “What little I saw of UNC-Charlotte is that they can play the pack-centric ball and aren’t afraid to kick for territory. Kicking is all about confidence, so that probably means they are good off the restarts and off the tee. Should be a good game.”