The Red Conference has two 2-0 teams in Twin Cities and New York, but that will end this weekend when the two duel in Minnesota. Against the D.C. Furies on Sunday, the Amazons made a couple of adjustments to its pack from last week, bringing flanker Rachel Maas to the front row and lock Anna Brown to No. 8., while Xanthi Gerasimo got the start in the second row. The back line was nearly the same, the lone exception being Jasmine Davis at wing.

The scoring started early, as Maas dotted down in the opening minutes and fullback Jacie Vonada kicked the first of her five conversions on the day. The first half ended with a 24-0 lead to the home side, as Davis scored and then inside center Katana Howard dotted down back-to-back tries.

D.C. cracked the scoreboard early in the second half when lock Lucia Martino scored, but it was another 40 minutes until the visitors scored again. Scrumhalf Gussie Maguire put five more points on the board during injury time, and outside center Karoline Walter converted for the 12 points.

In between D.C. scores, Twin Cities sent reserve Kate Stephens and captain Sylvia Braaten into the try zone. The flyhalf actually scored three times in the fourth quarter for the 50-12 win. The D.C. Furies will be looking for their first win of the fall this Saturday evening when the team travels to Atlanta for a match on Life University’s campus.

New York got more push-back from Atlanta in the other Red Conference match. The Harlequins, playing in their second road game, were disruptive in and around the breakdown, and that frustrated New York.

“It was one of those games where the wind was good, there was good momentum, but it didn’t feel quite as put-together as last week,” said New York captain Tiffany Faaee, who returns from injury this week against Twin Cities.

“Atlanta was relentless in the rucks and their launch was on-point for 80% of the game,” she added. “They were making it hard for [scrumhalf] Shelby [Lin] to get clean ball to the backs, so they didn’t get as much ball as last week.”

New York did make good use of the ball early in the match, putting up 12 points in the first quarter and adding a second try before the break. But the home side struggled in the middle 40, and Atlanta was able to pull within six points before halftime, 19-13.

“We gave up seven penalties in the first half, and Atlanta was really smart in taking advantage,” Faaee said of the Harlequins’ nine points off the tee. “That was us not being very disciplined, and we made it harder on ourselves.”

Ryszard Chadwick filled in for absent head coach James English, and used the break to re-center the team.

“He explained again that we wanted to use our speed out wide more. The forwards were taking it into contact for one too many phases,” Faaee said. “Just get the ball out to the backs and let them have a go at the fringes. That’s how we were able to get into their territory more.”

The forwards did a better job of preserving space for the backs, but Atlanta played good defense. In the second 40, New York added one more try through Lisa Roselin, while Atlanta tacked on a penalty for the 24-16 final.

“We’re glad that we got the win … but toward the end, the girls came off saying that it was harder than we wanted it to be,” the Eagle prop added. “We knew we could have played better and were scrambling to get in the groove, but Atlanta did a good job applying pressure.”

San Diego’s opening weekend in the WPL was a sobering one, but the result was a team eager to redeem itself with an 80-minute performance. That motivation turned into a 69-7 win over Berkeley.

“We built from lessons learned last week,” San Diego coach Jarrod Faul said. “We had more clarity in our systems this weekend, more cohesion. We did a really good job with the width of the field and attacking spaces.”

“We tried to play an expansive game and did a good job of keeping the ball alive, keeping at pace, and stressing the defense,” Faul said. “We’re still working on our systems and really working on our accuracy and recognizing when to take the space.

“And if we want to play that fast, expansive game, then we need to be fitter – which is something I’m constantly driving with the girls.”

Faul is also pleased with the numbers at training, with more than 40 players bringing a competitive edge to the squad and challenging for positions. This week, Rogers, Kate Zachary, Jordan Gray and Lauren Brisbin got their first starts of the season.

Both Glendale and ORSU made three changes to their respective starting rosters. Melissa Polheber, Julie Tordonato and Fatima Chavez got the nod for the Raptors, while Melody Glasgow, Te Awhina Ho Chee and Emma Krnacik made the Jesters’ first XV.

The visitors took the first lead, and then ORSU answered with back-to-back tries for a 10-5 edge.

“The biggest challenge to our possession was turnover ball and their counter-attack on us,” Glendale captain Christen Suda said. “When taking the ball into contact, they could turn us over, sometimes it was rucks and other times it was straight from our hands. They’ve always done that really well. … We had possession for a good amount, but they played good defense.”

Some key substitutions injected new life onto the pitch, and the Raptors were able to run in three unanswered tries. By game’s end, Pohleber, Sarah Chobot, Andrea Prusinski and Justine Wypych dotted down, while Colleen Cribbs converted for the 22-10 win.

“We were able to pull out the win by settling into our pattern and keeping composure in a very tight game,” Suda said. “Just not being too frantic. It was very similar to last weekend’s game.” 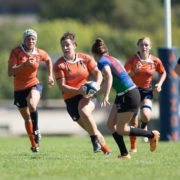 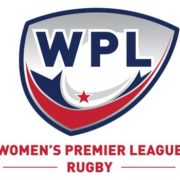