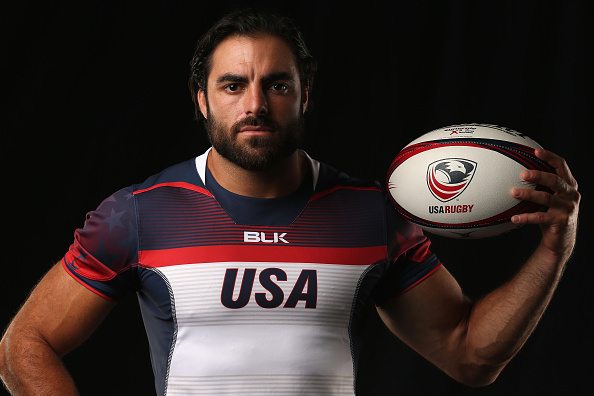 Much has been said about Nate Ebner’s transition from rugby to professional football and back. Heartwarming tales of a five-year-old working out with his father and a 13-year-old taking down adults on the rugby field precede the no-nonsense stories of the Ebner who walked on to the Ohio State University football team, earning a call from the NFL’s New England Patriots in the 2012 NFL Draft. Four years, 47 tackles, and a Super Bowl later, Ebner is back in the game of rugby union, this time with Team USA’s Rugby Sevens squad at the Rio 2016 Olympic Summer Games.

Certainly, Ebner’s dedication to rugby reaches far beyond his desire to win an Olympic medal. Ebner began playing rugby at an early age under the direction of his father, Jeff. After a stellar career in youth rugby, Nate began talking with his father about trying out football at The Ohio State University. Sadly, just after beginning these conversations, Jeff Ebner was murdered by a man attempting to rob his auto reclamation business. Now, Nate is making his late-father proud by returning to the sport they shared.

USA Rugby Trust: When did you start playing rugby?

Nate Ebner: I started playing rugby at the age of 6. That was when my dad introduced me to the game. I would go watch his games as a kid and that’s when I started to pick up a ball and learn how to pass and the basic rules of the game.

USART: I know your connection with rugby was largely built through your relationship with your dad. Can you tell me a little more about that?

NE: Obviously he introduced me to the game. But as I got older he coached my teams and I would go to the men’s practices with him. He taught me a lot about the game – even more about character and the attitude it takes to play it. We even got a couple chances to play in some games together as I got older which was a lot of fun and an experience not many fathers and sons can say they’ve done together. We would work long days at the junk yard and then drive to Columbus together to go to rugby practices in the summer. It was something that bonded us along with all the lifting weights and training we did together, not to mention the other normal father son things we did together.

USART: After your dad passed away, you made the switch to football. Tell me about that experience.

NE: Before my dad passed we had talked about me playing football. I wanted to play, I missed out on playing in high school even though I wanted to, but with the Junior World Cups and me potentially taking a spot of a kid who worked their entire high school career to be a starter as a senior…that didn’t sit well with me so I held out. My high school went on to win the division 1 state championship that year. I was done with Junior World Cups after my freshman year in college and I wanted to walk on to Ohio State’s football team. I spoke with my dad about it and I decided to do it under one condition: he said only to do it if I put rugby on hold and give everything I have to football to try and make it to the NFL (which was a goal of mine). It wasn’t a good enough reason to leave the decent rugby career I had started just to walk on to Ohio State just to say I played football there. That conversation was the night before he was attacked at the junk yard when he came to Columbus to have dinner with me.

USART: What would you say is the biggest difference between playing football and rugby?

NE: There are many huge differences between the two games. They are vastly different. So to pick one difference is difficult. I’d say the nonstop pace of rugby is the biggest difference. But ultimately it is very different, I’d say it is more relatable to basketball or even hockey than football.

USART: What made you decide to come back to rugby, despite having a contract with the Patriots?

NE: Hearing that rugby would be in the Olympics – a sport I grew up playing, a sport that was my first passion – how can you not want to be a part of that experience? It was something I thought about quite often throughout the past couple years playing football and the thought of not trying to go do it ate me up inside. Ultimately, the regret of not trying to play, wondering what it would have been like, watching old friends I played with play in the Olympics, that was something that would keep me up at night and that didn’t sit well with me. I want to live my life with as few regrets as possible, so that made my decision for me. Obviously there could be serious results to me sitting out the off season with the Patriots, but that was something I came to terms with and the idea that something bad could happen simply wasn’t a good enough reason for me to not try and live out a dream.

USART: When you told the Patriots that you wanted to pursue this dream, what was that conversation like?

NE: It was a lengthy discussion, over many different conversations. But in the end, they knew who they drafted in 2012 in me being a rugby player and they understood this is a once-in-a-lifetime opportunity for me and they have shown nothing but support through this entire journey. I’m so lucky to have their blessing and this may not have happened without them backing me to do so.

USART: Tell me about the moment you found out rugby would be returning as an Olympic sport at Rio.

NE: How can you not want to be a part of that experience? The Olympics is the pinnacle of the sporting world; knowing I might have the ability to make that team and participate in that event was something I couldn’t get out of my head.

USART: How did you prepare for the Olympic Games?

NE: I’ve been preparing for this since March. After I finished my talks with the Patriots I flew straight out to San Diego to start training with the team at the Olympic Training Center in Chula Vista, California. I went on tour with the team during the last four legs of the World Rugby Sevens Series circuit. I played in the Hong Kong 10s international tournament, made my debut with the 7s team in Singapore, played again with them in Paris. Then played another international tournament in Tour, France. We then had a six-week high performance Olympic training camp where 25 guys were attending the camp, only to select 12 to represent the country. It has been a lot of hard work, some of the hardest and most physically demanding things I’ve had to put my body through. I’ve truly been tested and have put everything I have into this, to ultimately leave, on the team or not, with no regrets.

USART: What are your plans for after the Olympics?

NE: As soon as the rugby is done, I fly back to Boston for the rest of training camp with the Patriots…literally the next day. Hopefully I’ll continue my career with them and play out another season as a Patriot.

USART: Why do you think it’s important for people to support rugby in the United States?

NE: I think it’s important for people to support rugby in the United States for simply the great game that it is. I think rugby sevens will really connect with the U.S. audience. But more importantly, rugby has taught me many life lessons. It’s more of a blue collar sport than anything I’ve ever experienced. It’s also created great friendships that will last me a lifetime and has taken me all over the world and I want other people to have those same experiences.

With the Olympics in full swing, the Eagles need your help to reach their $50,000 goal to support, develop and grow the game of rugby in the United States. Join Team USA by making a gift to the Men’s and Women’s Sevens programs. Click here to make a donation.