LAFAYETTE, Colo. – Austin Huns’ first-place finish in the Red River competition puts the Huns in their first Club 7s National Championship in the team’s history, but the No. 1 Red River seed also sees Austin into Pool A – an extremely experienced pool. Seattle Saracens, Kansas City Blues, and New Orleans make up the rest of Pool A, and combine for 33 National Championship appearances.

Seattle Saracens‘ eight National Championships at Club 7s includes years the team played as Old Puget Sound Beach Rugby, Seattle-OPSB, and Saracens. Whichever label the boys from the Pacific Northwest have played under, they have proven to have mastered sevens.

True to Seattle’s typical form, Saracens will bring a few standouts with international résumés behind them, along with a host of young, up-and-coming players. Miles Craigwell, Mike Palefau, and Peter Tiberio have each played a lot of games with the Eagles, and all three have won National Championships with Seattle. Then there is William Rasileka. An imposing center in 15s, Rasileka has quietly played a big part in Saracens’ superb form in both 15s and sevens in recent years.

Eagle flanker and Central Washington University All-American Aladdin Schirmer is not available for Nationals while he captains the AIG Men’s Collegiate All-Americans on their Tour to Queensland sponsored by WellDog, but his brother, Maverick, and four other Central Washington Wildcats will attempt to help the reigning champions repeat.

The Austin Huns surprised many by winning the Red River competition this summer. After an improved 15s season, the Huns opened the summer with a first-place finish at Bloodfest 7s, a non-qualifying tournament, but an early indication that Austin had a legitimate shot at Nationals.

During the qualification process, the Huns continued their first-place form by taking the top prize at the initial Red River qualifier in Little Rock, Ark. Austin concluded the three-event series with two second-place finishes, and the performances were not only enough to punch Austin’s first Club 7s ticket, but also claim the top seed out of the Red River.

The newly formed Rugby Utah National Development Academy came out of the gate firing on all cylinders in the Frontier competition. Rugby Utah’s qualification before the Frontier’s three-tournament series had completed meant that either Kansas City Blues and/or 2015 Cup Finalists Denver Barbarians would miss out on the biggest club sevens event of the year. Fortunately for the Blues, their second-place finish at the third and final Frontier qualifier put them into the Championship field ahead of a Barbarian team the rest of the field is thrilled to not have to play at Nationals.

After an impressive third-place finish in 2014, the Blues were disappointed to miss out on Cup qualification at last year’s Nationals, but did well to bounce back to win the Bowl. While the team enjoyed bringing hardware back home to Kansas City, the club would no doubt be disappointed to be left out of the Cup Quarterfinals again this weekend.

Several players crucial to the Blues’ recent success on the National stage will make the relatively short trip to Denver, including danger-men Gannon Moore and Kendrick Scott.

Following back-to-back National Championship appearances in 2013 and 2014, New Orleans missed out on Club 7s last year. NOLA is back in this year, but the road to Nationals was not an easy one. NOLA opened the summer with a first-place finish at its host event, but then settled for a second and third-place finish down the stretch.

New Orleans put a strong foot forward when it counted, however, fending off squads like Charlotte, Legion of Doom, and Oklahoma Elite to place second at the South Championships behind Atlanta Old White for its chance to improve on the club’s best finish at Nationals, which came with a Bowl Championship in 2013. 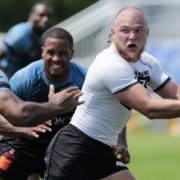