LAFAYETTE, Colo. – Any pool that includes a reigning champion is going to be a tough group from which to qualify for the Cup Quarterfinals. That is exactly the task asked of Old Blue of New York, Phoenix Rugby, and Youngbloodz, as 2015 USA Rugby Emirates Airline Club 7s National Champion American Rugby Pro Training Center headlines their pool.

Reigning Nationals Champion American Rugby Pro Training Center is not only the favorite out of Pool A, but might be the overall favorite to win the 2016 National Championship.

A year after going 6-0 on its way to the 2015 Club 7s National Championship in its first year competing at the event, ARPTC has reloaded with a new group of camp attendees for the summer and has not had its stride affected. Playing out of the Red River, ARPTC did not lose a single match during its three-event sweep of the region’s qualifiers.

The National Development Academy out of Little Rock, Ark., has not rested on its Red River results for Nationals preparation, either. Cup Quarterfinalists from the past three National Championships, Chicago Lions took a trip to ARPTC for training and a series of scrimmages in July, which helped the reigning Champions execute under pressure during a weekend free of qualifying tournaments.

Only half of last year’s championship roster returns to defend its title, including Eagle full back Jessica Wooden, but collegiate standouts like Penn State’s Sophie Pyrz and Life’s Christina Swift have filled in the holes nicely.

Youngbloodz are one of the most feared women’s sevens sides in the country – and it is not because of its name. The Midwest select side has qualified for Nationals for the fifth consecutive summer, and reached the Cup rounds at every event except for one.

The entire Youngbloodz traveling squad is made up of athletes from either Minnesota or Wisconsin, and this year’s team includes a contingent from 2013 Women’s Premier League Champion Twin Cities Amazons, but none more important than Sylvia Braaten. The 2014 Rugby World Cup veteran’s ability to get the ball into the hands of the Youngbloodz’ most talented ball-runners will be key to the team’s chances of cracking another Cup Quarterfinal.

Similar to ARPTC, Old Blue of New York‘s top side did not drop a single match during qualification process. The program commonly entered multiple teams into tournaments to test its depth and combinations before settling on a 12-woman team to send to Colorado.

The Old Blue side that will play at Dick’s Sporting Good Park has a similar makeup of the team that played for a 2014 Cup Final in Seattle. That year a group of talented college-grade players, guided by longtime Eagle Phaidra Knight, navigated all the way to the Championship match. This weekend, Old Blue will run out college players from top programs like Dartmouth, Norwich, Penn State, and Stanford, while Eagles No. 8 and Penn State Head Coach Kate Daley should be the skilled and senior presence leading her younger teammates.

Phoenix Rugby will make its first appearance at Club 7s Nationals this weekend. The select side made up almost entirely of players from Florida Atlantic University, Florida State University, and the University of Florida placed second in the Florida qualifying process before settling for third at the True South Championship. The third-place finish was not good enough to qualify for Nationals, but Charlotte Rugby’s misfortune turned out to be Phoenix’s golden ticket.

Charlotte, which finished second at the True South Championship, was not able to field a 12-person team for Nationals, opening the door for Phoenix to makes its debut. The women from Florida will be the least known squad in Pool A, but, regardless of result, the young athletes will return to their college teams much better for having played at a National Championship event. 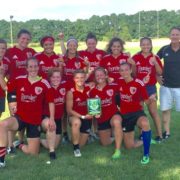