The women of the Chicago Griffins will make their first Club 7s Nationals appearance after they downed Youngbloodz, 36-5, in the Final of the Midwest 7s Championship. The Griffins, although not thought of as regional favorites going into the summer, had won the previous two Midwest events and only looked stronger at Saturday’s Championship. Youngbloodz did, however, qualify for their fifth consecutive Club 7s National Championship when they defeated Chicago Lions, 28-7, in the Semifinals.

While the women Lions fell one win short of a trip to Nationals, their male counterparts will head to Colorado as the Midwest’s No. 1 seed after taking down 1823 in the men’s Final. 1823 quickly built a 12-0 lead in the Midwest title game, but Chicago kept its composure throughout, and earned a late try to win the regional championship. 1823, which finished fourth at last year’s Club 7s Nationals, will head back to the Championship event for the eighth time thanks to its 26-12 Semifinal win over the Cincinnati Wolfhounds.

Three-time defending Club 7s National Champions Seattle Saracens are on their way to Dick’s Sporting Good Park to defend the 2015 title after taking first place in the men’s division of the Pacific North Championships. The Saracens won their first three round robin matches before dropping the fourth to Olympic Club. The regional Final would be a rematch between Seattle and O-Club, but the team from San Francisco could not quite keep pace with the Sarries and fell, 20-14.

Olympic Club’s appearance in the Pacific North title game punched its ticket to Club 7s Nationals for the first time since 2012. Meanwhile, notable squads from the Bay Area like East Palo Alto Razorbacks and Life West Gladiators will only be able to watch Nationals from home this year.

Berkeley, Oregon Sports Union, and Seattle will each represent the Pacific North at Club 7s Championships after finishing in the region’s top three on the women’s side of things. The Saracens did not drop a game the entire day, eventually beating ORSU in the Final, 29-0.

The Semifinals of the women’s bracket carried incredible importance as the loser would be left out of the National Championship field, and the winner would join the finalists in Colorado. After 14 minutes of play at San Francisco’s Treasure Island, it was the All Blues that came out victorious over Life West Gladiatrix, 19-12, giving Berkeley the opportunity to make a run at a record third Club 7s National Championship.

Visit USAClub7s.com for more information on Club 7s Nationals, and to see a list of all 32 teams that will be competing for the men’s and women’s 2016 Championships. 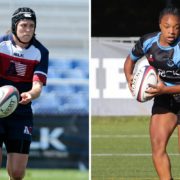