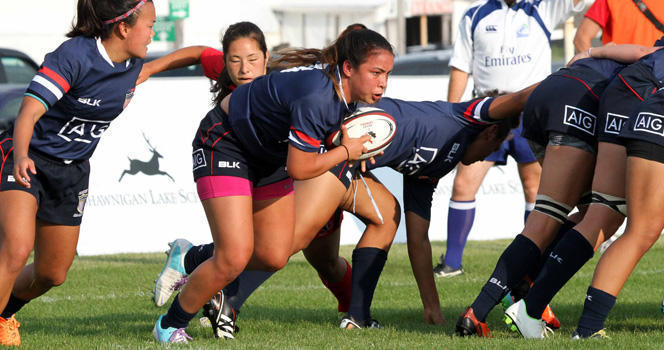 HARRISONBURG, Va. – The biggest assembly in USA Rugby history is underway for the Women’s Eagles. As part of the newly-designed pathway, the Eagles, AIG Women’s Junior and Collegiate All-Americans, and Girls High School All-Americans powered by Serevi are scouting players during the first National All-Star Competition.

More than 200 athletes and 50 coaches are participating in the NASC event held at James Madison University, from June 1-6.

“Players and coaches are excited to be here and it’s great to see so much talent in one place,” said 15s Head Coach, Pete Steinberg of the event.

To aid the selection process, players have been positioned on teams to compete throughout the week. Each team is scheduled to compete in at least two matches during the event.

“We want to create equal teams so the competitions are close,” commented Steinberg of the selection process. “We don’t know the players that well at the beginning of the cycle, so it has made the process difficult.”

The Women’s Eagles 15s staff is looking for players to compete at the Super Series, which will take place north of the border in Calgary, Alberta. The U.S. will square off against Canada, England, and New Zealand during the series.

A competition in August for the U20 WJAA side is also being considered during the NASC.

“Generally, we have had players compete at the highest level possible, so there are some U20 players who are playing with the seniors,” said Steinberg. “However, with the U20s having a competition this year, we have had some players stay down.”

The decision on where to place players came through a discussion between pathway coaching staff.

“It was really a discussion between staff members,” said Steinberg. “And it was between myself, Sue Whitwell, and Wil Snape to then agree after that.”

For the NASC event, players were assigned to a level of play – senior, collegiate, or U20. Although designated to a certain level of play, athletes at the camp are available for selection to all levels of international play.

Although the camp is primarily focused on selection for upcoming international events, the new pathway is putting emphasis on player and coaching development.

The environment and competitions allow for players to experience a higher level of play than is typically seen through local clubs.

“The NASC is an opportunity for players to play at an elite level,” said Steinberg of the atmosphere at JMU. “It is between domestic and international competition.”

However, Steinberg emphasized that the NASC “is not a camp –, it’s a competition.”

Players are not the only attendees gaining valuable experience from the event. The NASC was also designed to help develop coaches, staff, and referees alike.

“We are looking to use the competition structure to develop more elite coaches that can work in an international environment,” said Steinberg. “We also want to leverage the opportunity to develop support staff managers, trainers, and referees.”

Another NASC event will be held in Greeley, Colo., to accommodate players that could not attend the first event. More than 100 players not in attendance will be extended an invitation to the later event at University of Northern Colorado.

Further details on international competitions have yet to be announced.