The Eagles beat New Zealand for the first time on the World Rugby Women’s Sevens Series circuit in pool play at Amsterdam Women’s Sevens before finishing fourth overall at NRCA Stadium. In the Third-Place Match, England scored three tries to the U.S.’s two to win and secure the fourth spot in the Series standings, qualifying Team GB for the Rio 2016 Olympic Summer Games.

The attention now turns to WakeMed Soccer Park in Cary, N.C., where the U.S. will attempt to qualify for Rio 2016 at the 2015 NACRA Sevens Championships. With 96 points, Canada finished the 2014-15 Series in second and will not participate at NACRA Sevens.

Potter, who was a member of the Residency program at the OTC until Women’s Rugby World Cup 2014 and her battle with cancer, has been training on her own at the United States Olympic Committee’s headquarters in Colorado Springs, Colo, and will return to the program in Chula Vista following NACRA Sevens. She will attend the pre-NACRA Camp for three days and is on track for a return to the team during the 2015-16 Series.

“She still has the comforts of home [working out at the OTC in Colorado],” Suggitt said. “We’re getting good feedback there so we’re really happy for ‘Potts.’ As I said to her, it’d be nice if we could get her to come out and play this summer, but if we can’t do that then we definitely want her ready for Dubai.

“[Strength and Conditioning Coach] Jared [Siegmund] and those guys have put together a really good program for her to make sure she’ll be ready in six months.”

One of the newest Eagles in Residency, and another who represented the U.S. in France at the World Cup last summer, Carmen Farmer will provide additional veteran leadership at Camp. Emily Azevedo, who was forced to miss London Women’s Sevens and Amsterdam Women’s Sevens due to her retirement from Olympic bobsledding earlier this year, will also continue to improve her rugby sevens skills with a few decorated high school athletes.

“[Carmen and Emily] are both 30 and have played a high level of sports, and they bring a maturity to our training program,” Suggitt said. “That is why they’ve been helpful, even if they haven’t played in any tournament. They’ve been training here for a couple months now, and it adds a level of experience, maturity, and how you behave.

“They lead by example.”

For Durbin, the youngest athlete selected for the AIG Women’s Junior All-Americans during the tour to Canada in 2014 at 16 years of age, the pre-NACRA Camp is not a first at the OTC.

“Lilly is very quick,” Suggitt said. “We’ve had her out at camps before; she’s courageous. She has all of the physical attributes that you need. We just need to make sure we have a good, safe progression for her and get her into the right environment and into the right spots. That’s what we’re going to do.”

Twelve players will be selected from the pre-NACRA Camp to travel to North Carolina for the 2015 NACRA Sevens Championships. Starting at $15, tickets are available in single-day and weekend formats for the June 13-14 regional qualification tournament. Visit the NACRA Sevens event website for more information. 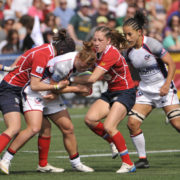 Women's Eagles Sevens: the need to overachieve
Eagles head back to camp in advance of 2015 NACRA Sevens Championships