Mike Friday’s squad finished pool play undefeated and scored a combined 12 tries in Quarterfinal and Semifinal wins against Canada and England, respectively, at Twickenham Stadium. The U.S. reached the Cup Semifinals for the third time this season, while the Final appearance was the first and only since the 2009-10 season’s Adelaide stop.

Madison Hughes finished the tournament as joint-top try-scorer with seven five-pointers, and was the leader in points with a total of 65. He and Danny Barrett were also named to the Dream Team.

England sealed fourth place in the Series standings Saturday, as well as the final automatic-qualifying spot for the Rio 2016 Olympic Summer Games. The U.S. finishes the 2014-15 Series sixth with 108 points, 37 more than its best Series total in 2012-13.

Australia was the other remaining undefeated following Semifinal exits for Fiji and England, and began the match with a try in the first minute. Nick Malouf received the ball at midfield and galloped just out of the reach of Andrew Durutalo on the wing. The try was not converted for a 5-0 score line.

The Eagles got their first touch of the ball when Barrett won the restart. Andrew Durutalo got through a tackle to get the midfield and the ball moved wide to Hughes, who sped away from the defenders to dot down between the sticks. He converted the try to give the Eagles a 7-5 lead.

The ball stayed with the U.S. after Unufe won the restart and Barrett took the ball through two defenders around midfield before standing up to the full back for the try. Hughes’ conversion was successful for a 14-5 lead.

Leuta caught the ensuing restart and got the ball to Durutalo to get to the five-meter line. The Eagles used the space effectively and passed quickly to the wing, where Barrett had plenty of room to score his second of the match. The touch-line conversion was just wide, keeping the Eagles’ lead at 19-5.

Australia went for a lineout when the Eagles conceded a penalty on the restart, and used the field position inside the U.S.’s half to get one try back through Lewis Holland. Two quick offloads set up the opportunity for Holland in support, and the No. 4 cut the deficit to 19-10 after eight minutes.

The Eagles gained the 22 with a set play from an Australian penalty on the restart. The ball went wide to the left, where Leuta held off a tackle long enough to pass off to Maka Unufe. Unufe jumped over one tackle and offloaded to Folau Niua 10 meters from the try zone before getting it back to dot down over the line. Niua converted the try for a 26-10 lead.

It could have been one more before the end of the half, but the referee called a forward pass as the Eagles approached the try line once again.

Unufe won a penalty in the breakdown and Niua kicked to touch for a lineout at midfield. Efficient passing resulted in Perry Baker receiving the ball 20 meters from the touch line. The speedster broke one tackle on his way around the wing and fended a second before racing to the try zone. The conversion was successful, extending the lead to 33-10.

Australia responded after one phase of the attack when Malouf added his second of the match under the posts. Lueta and Hughes made sure the Eagles got the ball on the ensuing restart before they drew a penalty just inside midfield. Hughes’ quick tap began the attack, which was ended by Unufe’s 50-meter run from a dummy pass.

The 38-15 lead lasted until the 19th minute, when Sam Myers put the ball down in-goal, but season-debutant Thretton Palamo added the final tally with a 60-meter run on the other side of the restart.

The Eagles will regroup at the Olympic Training Center in Chula Vista, Calif., for their next opportunity to qualify for Rio 2016: the 2015 NACRA Sevens Championships in Cary, N.C., June 13-14. For tickets to the regional qualification tournament at WakeMed Soccer Park, visit www.nacrasevens.com. 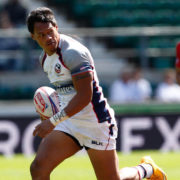