LONDON – The Men’s Eagles Sevens restored their advantage over Canada with a 29-10 win in the Marriott London Sevens Cup Quarterfinal Sunday.

While Canada’s 40-0 shutout defeat of the U.S. in Glasgow last weekend was not enough to derail Mike Friday’s side’s tournament, it was important for the Eagles to get a win against their rival ahead of the 2015 NACRA Sevens Championships, where they will battle Canada for a Rio 2016 Olympic Summer Games qualification spot.

Maka Unufe helped the Eagles win possession on the opening kickoff, forcing Canada into conceding a penalty. Madison Hughes sent a grubber kick behind the defensive line and ran onto it to dot down between the posts for an early, 7-0, lead.

Canada could not find much space on the pitch as the Eagles kept their shape through phases. Perry Baker’s run down the right-hand touch line in the fifth minute was cut short, and the winger turned over possession with a step into touch. He and Hughes made crucial tackles on the opposite wing before Canada moved the ball wide again to Mike Fuailefau, who was able to get the ball down in-goal through Danny Barrett’s sliding tackle to bring the score to 7-5.

Barrett kept hold of the restart and the Eagles retained possession by drawing a penalty, and a quick ball to Baker cutting inside at midfield was all the speedster needed to give the Eagles another seven-point lead heading into halftime.

A Canada knock-on on the restart gave the Eagles a platform of attack at midfield, and a pop pass from Hughes to an onrushing Unufe doubled the advantage to 19-5. Two minutes later, Baker refused to be taken into touch on the wing to keep the ball for his side before the Eagles swung it wide to Garrett Bender. Bender stepped inside Fuailefau and broke the tackle of Connor Braid to extend the lead to 24-5.

Thretton Palamo took to the pitch at Twickenham Stadium late in the second half for his first action of the weekend and had a 20-meter run to midfield that ended with a knock. From the turnover, Nathan Hirayama sent a crossfield kick to Harry Jones inside the 10 for Canada’s No. 11 to score.

It was too late for Canada to come back from two converted tries, and Carlin Isles added a try at the end of the match with quick ball from a quick tap finding the winger in space to bring the final score to 29-10.

England qualified for Rio 2016 as the Team GB representative after its second match of pool play Saturday and finished second in Pool C to set up a Cup Quarterfinal matchup with New Zealand, which the home team won, 21-17. The U.S. will face England in its third Cup Semifinal of the Series at 9:40 a.m. ET. 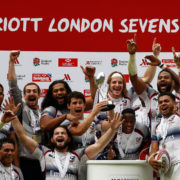