BOULDER, Colo. – Reigning National Champion Central Florida will defend its D1AA title against the University of California – Davis after each team won its Regional Playoffs April 25-26. The Knights return to the Championship Final after defeating the Merchant Marine Academy in the round of eight and West Virginia in the Semifinals of the East Regional in Pittsburgh, while Davis won the West Regional with wins over Western Washington and Arkansas.

Central Florida overpowered Kings Point to the tune of a 35-point victory on day one. Grady Barnard banged through five conversions and added a try, while second rower Christian Rossi had four tries of his own to guide the Knights to their 50-15 win.

Keystone Conference Champion West Virginia was able to dispose of surprise Regional participant Yale. After the Bulldogs notched the first points of the Quarterfinals on Graham Harboe’s try, the Mountaineers scored the game’s next 17 points. Number eight Ryan Blythe would add two second-half tries to help earn his squad a shot at Central Florida in the Semifinals.

Barnard’s boot proved accurate again in the East Regional Final as the Knights’ fly half slotted his team’s first three conversions to give Central Florida an early, 21-5, advantage. However, West Virginia would close the opening half with a converted Austin Hoover try and penalty from full back Chris Mackenrodt.

The surge by the Mountaineers continued briefly into the second half, with Mackenrodt adding another penalty just six minutes into the frame to bring the score to 21-18 in favor of the Knights. Those, however, would be the final points West Virginia could muster. Meanwhile, Rossi added his fifth try of the weekend, and prop John Sennett, who dotted down in the first half, put down two more to push Central Florida’s lead to 38-18 by the time the final whistle blew.

In Davis, Calif., the hosting university found itself in a tight battle for 40 minutes before pulling away from Western Washington in the second half. Centers Yutaro Kobayashi and Nathan Oliveira scored second-half tries and fly halves Josh Campos and Ian McCaffrey combined to make seven of eight conversions in the Aggies’ 50-10 win.

On the other side of the West Regional bracket, red-hot Long Beach State built an 11-0 lead before a determined Arkansas side stormed back. Two second-half tries by fly half Jack Casey and an improved defensive effort proved the difference in the Razorbacks’ 22-14 win.

In the West Regional Final, Davis was able to replicate its day-one swagger from the opening whistle. Five different Aggies scored tries in the match’s first 30 minutes to build a 24-0 lead.

Casey would open the second half by getting over the end line to give the Arkansas No. 10 his third try of the weekend Still, Davis would respond with five more tries, including two from winger Brian Albin, for the impressive, 61-10, rout.

The successful Regional weekends for Central Florida and UC Davis pit the two squads against one another at the May 9 USA Rugby College 15s National Championships at Fifth Third Bank Stadium at Kennesaw State University. Along with the D1AA Final, the Men’s D1A and Women’s DI and DII National Championship matches will also be played May 9. 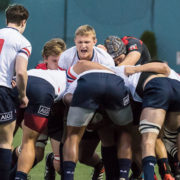 Philadelphia's Other Eagles Returning to PPL Park
Scroll to top