PITTSBURGH – Central Washington will play Penn State for the Women’s Division I National Championship and UC Riverside will contest the DII title with Notre Dame College after the Wildcats and Highlanders won the DI and DII Spring Championships, respectively.

On day one of the Women’s DI Spring Championship, Heather Johnson gave Central Washington an early, 5-0, lead, but an inspired Life side would score the next 17 points to take a 12-point lead into halftime of the April 24 Semifinal. However, the Wildcats hit their stride after the break, and tries from Cassidy Meyers, Fina Toetu’u, Samantha Pinson, and a second from Johnson would run Central Washington’s lead to 40-17 by the final whistle.

The defeat was disappointing for Life, but only a minor letdown in what was otherwise a remarkable season for the first-year program.

“It’s amazing what this group of women has accomplished in such a short amount of time and we are right back at working hard toward an even better 2015-2016,” Head Coach Rosalind Chou told LIFE U. “This team is hungry and thirsting for more improvement, and we look forward to growing with all the hard-working recruits we have coming in next season.”

On the other side of the DI bracket, BYU received resistance in the early going against West Chester in the Semifinals, but the Cougars proved too strong for the 2014 Semifinalist, prevailing, 56-20. Seven players scored tries for BYU, but the Pacific Mountain Rugby Conference Champions were paced by prop Rebekah Boaz’s four tries.

A day later, Central Washington took the field with BYU for a place in the May 9 USA Rugby College 15s National Championships on the line. Just four minutes into the Spring Final, a yellow card sent Central Washington’s star center, Asinate Serevi, into the sin bin. Soon after, the Cougars’ Jordan Gray used the 15-on-14 advantage to score two tries, the second of which Chanel Arts Johnstun converted before adding a penalty in the 27th minute.

The fast start by BYU created a hole for Central Washington to climb out of, but it wasn’t enough to phase the battle-tested Wildcats.

“The first 10 minutes we knew they were going to be physical, and BYU was able to get some quick tries,” Central Washington Head Coach Mel Denham told CWU Athletics. “But we knew it would take time and we were confident we would get back into the game.”

Serevi would cut into the deficit with a converted try to bring the halftime score to 15-7 in favor of BYU. In the second half, fly half Katerina Long put points on the board early on with a penalty and gave the Wildcats their first lead by converting Rosalind Pena’s try midway through the second stanza.

Known for their explosive attack, the Cougars’ offense sputtered against Central Washington’s suffocating defensive effort. In contrast, the Wildcats’ attack gained momentum as the match wore on, as Ashley Rolsma dotted down and Serevi added her second try.

In the end, Central Washington was left to celebrate a 29-15 victory and its place in the Women’s DI Final against perennial power Penn State.

“It’s exciting to have a chance to win a National Championship,” said Denham, whose American International squad finished third in DI in 2013. “We have to get home, recover, and get to work. We have to step out [sic] game and play at another to give ourselves the best opportunity to defeat Penn State.”

Riverside’s place in the Final was in question early, as the Highlanders were trailing Salisbury, 12-10, 15 minutes into the game. However, Riverside would receive hat-trick performances from both Domonique Bellinger and Brande Samaan to help race to a 56-24 win.

In similar fashion, Northridge trailed early, but did well to contain Florida International’s speed and defeat the Panthers, 27-5, on the strength of Yesenia Camacho’s three tries.

In the thrilling Final between the two southern California clubs, a back-and-forth 80 minutes led to five lead changes and three tries. Down 20-17, Northridge sent prop Ciarra Waters-Mullen over for what looked a game-winning try. However, Michelle Wong, who produced the a three-point lead with a penalty goal in the 74th minute, kicked the Highlanders into the DII National Championship Final with another successful attempt at goal on the match’s final play.

Penn State awaits a challenge from Central Washington after conquering Norwich in the DI Fall Championship, while Notre Dame College will be opposite Riverside after its 45-10 defeat of Winona State in the DII Fall Final. 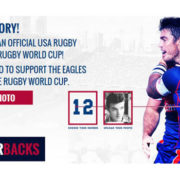