KENNESAW, Ga. – The Women’s Eagles Sevens defeated Russia, 19-14, Sunday for the second time at Atlanta 7s to book their first trip to a Cup Final since Houston 7s during the inaugural World Rugby Women’s Sevens Series in 2013.

Lauren Doyle scored a spectacular individual try in the Cup Semifinal and Victoria Folayan brought her tournament total to five tries scored with two in the first half at Fifth Third Bank Stadium at Kennesaw State University. Russian captain Ekaterina Kazakova added two second-half tries for her side in a match featuring two yellow cards.

The first yellow card was shown to Baizat Khamidova seconds into the match after clashing with Kathryn Johnson on the kickoff. The Eagles were not able to score with the advantage, but they wore down Russia with attacks into their opposition’s half.

Bui Baravilala nearly set Doyle away for the first try in the fourth minute around Russia’s 22. Doyle kept up with her teammate and received the pass, but the Women’s Rugby World Cup Eagle mishandled the return pass and lost it into touch. The Eagles regained possession with strong defensive work to win a penalty within a few phases and a fend on the winger was all Folayan needed to open the scoring.

The Eagles were tenacious in their work rate throughout the match, just as they were in their 10-5 upset of second-ranked Australia in the Cup Quarterfinal. Joanne Fa’avesi and Johnson combined for several tackles one after another along the touch line in the Eagles’ half. A phase later, Russia turned over possession.

Doyle was brought into touch with a high tackle at the Eagles’ 10, setting up the U.S.’s attack with a fresh platform. Russia got the ball back when the Eagles reached their opposition’s 22, but the strong defensive shape did not leave much room for Russia to move.

With time expired on the clock, Russia decided not to end the half with a kick to touch, instead looking to lessen the deficit. With the defensive line intact, the Eagles forced Russia to move the ball through hands, where Doyle jumped on a pass to break free for a try. Baravilala successfully kicked the conversion to bring the score to 12-0 at the break.

Russia shut out England by a wide margin in its Cup Quarterfinal, while it took a last-second try from New Zealand to avoid an upset by the Bears in pool play Saturday. The Eagles finished their tackles and stayed disciplined to earn their halftime lead.

“Russia’s a really good team,” Eagles Head Coach Ric Suggitt said after the match. “They’re physical and they play straight-up rugby on you, so you have to be courageous and make your tackles.

“Sevens is such a game that it can go either way. It went our way in the first half and it went Russia’s way in the second half.”

Alev Kelter was sent to the sin bin in the ninth minute for a dangerous tackle, giving Russia the advantage of an extra player on the pitch. The tables turned as the momentum swung in favor of the Eagles, however. A penalty against Russia awarded the Eagles the ball and Megan Bonny set up Folayan for a third Eagles try. Baravilala’s second conversion extended the lead to 19-0.

With every point earned at a Series stop valuable in the battle for Rio 2016 qualification, Russia sought the try zone just as much as it would have in the first minute of a scoreless match. Kazakova dotted down for her first try a minute after Folayan’s second, and she used up the rest of her energy to score another just as the final horn blew, bringing the score to 19-14.

The Eagles improved to 6-2 against Russia on the circuit with the win, which followed the 19-12 victory in pool play Saturday. The Cup Final berth means the U.S. will jump England into fifth place in the Series standings with three legs remaining, but the Eagles are not thinking of the standings with New Zealand on the horizon.

New Zealand humbled the Eagles in the teams’ final Pool A match Saturday, while the Kiwis are undefeated against the U.S. on the circuit.

“[New Zealand has] the upper hand on us so we’re going to have to be mature about what we’re doing on the field and play with some courage,” Suggitt said.

The head coach also mentioned wanting to play the best team on the Series twice at every tournament to prove they belong in the top four last week.

“Well, we had to work hard to get our wish this time,” he said. “They laid a thumping to us [Saturday] like we were Bambi in the forest. This time around we better make sure we’re the animal and not just the deer. We have to get out there and prove our worth, and I think the girls will do that.”

By reaching the Cup Final, the Eagles will gain at least 18 points in the Series standings. With England’s seventh-place playoff appearance keeping the Roses to a maximum of eight points, the U.S. will jump to fifth in the standings when Atlanta 7s wraps.

The Eagles and New Zealand will begin their 20-minute Cup Final at 7:24 p.m. ET. Atlanta 7s can be viewed live on World Rugby’s Women’s Sevens Series website and live match updates will be provided by @USARugby on Twitter. 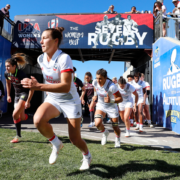