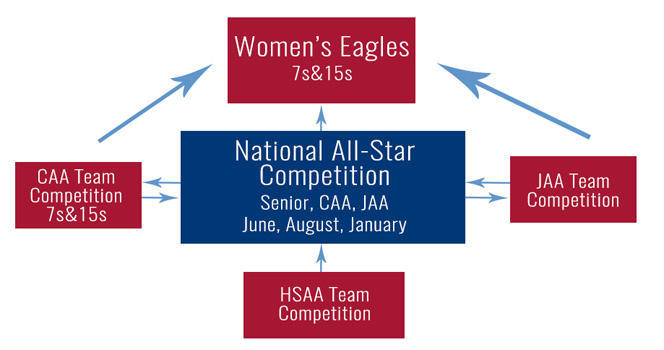 This article is part of the USA Women’s Eagles blog. All entries are written exclusively by members of the women’s national team.

Hopefully everyone has seen the change in the WNT pathway that was announced this week. It is a significant change in how players will be identified and then developed to be international rugby players in 7s and 15s. Fundamentally the change is that the Women’s Eagles, College All-Americans and Junior All-Americans have combined into one program. This comes with some major changes to the pathway:

There has been some confusion with the new National All-Star Competition and the old National All-Star Championship. There are obviously similarities in the name and the essential player identification goals, but the key difference is the united approach to player selection and identification from the new USA Women’s National Team Pathway. The old Championship was run by Territorial Unions and had initially 4 and then 8 teams (split into 2 tiers). There were Championships for senior women, U23 and eventually U19s. It provided a broad selection process as well as an opportunity for coaches to get a higher level of experience. As both a player and a coach at the old NASCs there were strengths and weaknesses of the structure. However, it was the prime way for players to be seen and for coaches to develop.

The new Competition is designed to provide both of those outcomes, but this time within the USA Women’s National Team pathway. There will be 3 NASCs each year (June/August/January) and at each there will be different levels of play – senior, CAA and JAA. Players will be identified at the various official selection vehicles throughout the year and invited to the camp. Players selected during this process will be broken into teams and will compete on an even playing field, through a week long competition that is run as close to an international event as possible. Coaches will be recruited to coach these teams as part of a new Elite Coach Development Program – look for a launch shortly.

So while the new NASC is not the same as the old NASC it will provide the same opportunities for coaches and players. 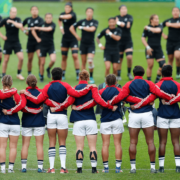 Making history with the Girls High School All-Americans powered by Serevi in...
Scroll to top